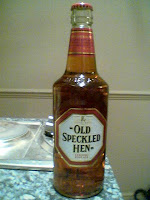 In the past few years, I’ve highlighted a number of examples of the strength of existing cask beers being cut, such as Old Speckled Hen, Brain’s SA Gold, Bombardier and Bateman’s XXXB. It’s easy to jump to the conclusion that this is linked to the “responsibility deal” under which the drinks industry has vowed to remove 10 zillion units of alcohol from the market by 2015, but in reality I would say it has much more to do with the changing nature of the beer market. As I said here, beers increasingly have to compete on the bar with others from different brewers, and any that is perceived as being out of step with the herd by being stronger than the norm (or indeed weaker) is going to lose sales.

It’s very different from the heady early days of the real ale revolution where the standard bearers were heavy, malty 1050 brews such as Ruddles County and Royal Oak. About the only remaining widely available free trade cask beer I can think of that is 5% ABV or above is Abbot Ale, and I wouldn’t rule out a future cut for that.

However, it’s not hard to imagine the spotlight of the responsibility deal being turned next on the premium bottled ale sector. While there are no mainstream premium lagers left above 5%, and many have been cut to 4.8%, there are plenty of PBAs in that category, many of which are considerably stronger than the corresponding draught beers. The market leader, Old Speckled Hen, is 5.2%, as is Thwaites Double Century, while Shepherd Neame Bishop’s Finger is 5.4%. And nobody can tell me the buyers of Bateman’s Victory Ale at 6%, or McEwan’s Champion at 7.3%, don’t have at least half an eye on “bangs per buck”.

Given the volumes sold, cutting the strength of bottled and canned Old Speckled Hen to 4.8% would make a big contribution to the “voluntary target”, and then others would be likely to follow. In the current climate, the slightest suspicion of using relative strength as a marketing tool earns a very black mark.

And here’s another speculation – might it be that in the future, declaring the alcoholic strength of drinks, far from being encouraged, will in fact be prohibited, to make it easier to get away with the progressive reduction in strength? All you will be entitled to know is the “strength category” of the beer. There is a precedent for this, too, as some years ago, stating the tar content of cigarettes was banned as, far from encouraging people to choose lower-tar brands, it was felt that it led smokers to regard those with less tar is in some way safer and thus they ended up inhaling more. Can’t be giving those proles the facts and letting them decide for themselves, can we?