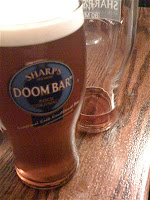 The Beer Orders and the subsequent massive sell-off of pubs were supposed to open the way for unprecedented choice in the beer market. To some extent this has happened but, as many warned at the time, opening up the market would tend to lead in the majority of pubs, not to more choice, but to a handful of popular beers squeezing others out. And, all too often, this is now the case. If you venture outside specialist beer pubs, you are likely to find the same limited range of beers dominating – currently beers such as Cumberland Ale, Old Speckled Hen, Wainwright, London Pride, Landlord, Doom Bar and Bombardier. None bad beers as such, but it’s depressing when you find three out of those on the bar of every non-tied pub you go into. It’s also the case that pretty much all of these are within the same strength range of 4.0%-4.5%.

On the other hand, in an independent brewer’s tied house, you may well find a more balanced selection with a wider range of strengths. For example, a Wadworth’s tied pub (The St James’ Tavern in Winchester) offered the 3.5% Henry’s IPA, the 4.3% 6X, and the 5.5% Bishop’s Tipple. Compare that with the typical “free” or pubco outlet where all beers will be within a couple of points of 4.2%.

Which, realistically, is better? And, as I’ve always said, choice should be found between pubs, not the same choice within every single pub.

The effect is even more marked in the keg sector. When, in England or Wales, did you last see any standard lager beyond Carling, Carlsberg and Foster’s outside a brewery tied pub?