History in a beer glass 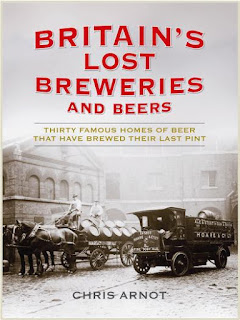 Britain now has more breweries producing more different beers than at any time since the Second World War. Yet, over the past fifty years, we have lost most of the substantial breweries that were in existence in 1960. Often these were major enterprises employing large numbers of people and to some extent defining the character of the places they operated in. Unusually for large industrial plants, they tended to be situated right in the middle of towns and cities and the distinctive aroma of brewing often percolated across built-up areas.

In a new book entitled Britain’s Lost Breweries and Beers, published by Aurum Press, Chris Arnot tells the story of thirty breweries from Devenish on the South coast through Buckley’s in West Wales to Campbell, Hope and King in Edinburgh, on the way visiting onetime local institution Boddington’s and Tetley’s and Webster’s which were both major influences on our local pub scene. In a sense, the central theme of the book is the connection between brewery and community. As the description says,

This is a story of more than the disappearance of Tolly Cobbold bitter or King & Barnes’ winter ale: all too often it is part of the heart of a town like Ipswich or Nottingham dying with the brewery – something no microbrewery’s resurrection of a hallowed ale can ever restore.

It’s a handsome large-format volume extensively illustrated with old pictures of brewery buildings, workers, delivery vehicles, pubs and advertising material. Rather than just relying on secondary sources, the author has travelled to view the sites of all the breweries and interview former employees and managers. The rather spiky interview with the 85-year-old Ewart Boddington is well worth reading. There’s a wealth of fascinating anecdotes taken from the various companies’ histories. However, it isn’t just a case of looking at the past through a rose-tinted glass – he recognises that not all of these breweries produced first-class beer (although most did), and even when they did it wasn’t always served in their pubs in the best of condition.

In summary, it’s an absorbing, well-produced book that will probably be picked up again and again rather than just left on the shelf. It would be an ideal Christmas gift for anyone interested in beer and history. The cover price is a not inconsiderable £25, but you should be able to get a discount at Amazon.

We are fortunate of course in Stockport that we still have a substantial long-established brewery in the shape of Robinson’s, whose beer and pubs are important elements defining the character of the town. Long may that continue.

(And yes, I was kindly sent a review copy of this book by Aurum Press. But I certainly haven’t been entirely complimentary about everything I’ve got for free – see here and here)