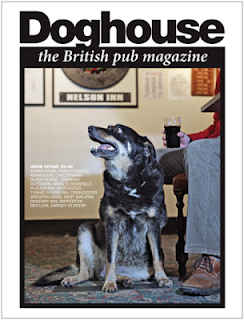 Boak and Bailey recently did a post entitled Considering a good beer magazine which looked at why, apart from CAMRA’s members-only BEER, there were no decent British-based beer magazines. In the comments someone mentioned Doghouse, although he said it was primarily a pub rather than beer-related publication. I have to say I had never heard of this before, but a quick look at their website suggested it was something that was right up my street, so I took out an annual subscription as a birthday treat to myself. The first issue arrived through my letterbox very promptly a couple of days later.

It’s described as “a quarterly print magazine about British pubs: a love-letter to bar stools and fixed settles: discovering & celebrating history, architecture, stories from the bar, the mystery of the cellars below and the ghosts that rattle around upstairs.” It’s an attractive A4-sized publication, perfect-bound on high quality paper, smooth but not over-glossy. It has a clean, elegant design very different from the rather fussier would-be trendy approach of BEER, and features many magnificent full-page or double-spread photographs.

It’s basically divided into two halves. The first features general articles about pub life and culture including, in this, the fourth issue, anecdotes from a pub regular and licensee, a long piece about cask-making centred on Hereford Casks of Stoke Edith in the Herefordshire countryside, and an opinion piece about children in pubs with which I heartily concurred – “a loud child has the unique property of being louder than a loud adult. Not only louder, but more grating”.

The second half then features specific pubs, taking the approach of starting from a particular town and looking at around ten pubs within a twenty-mile radius. In this issue it is Cheltenham and there is a long article about the Adam & Eve, a classic backstreet Arkell’s pub in the town. It also features classics like the Red Lion at Ampney St Peter, the Daneway Inn at Sapperton and the Five Mile House at Duntisbourne Abbots, all illustrated with high-quality interior and exterior photos that really make you want to pay the pubs a visit. This is an area of the country that I have often visited or passed through over the years and so I am familiar with many of the pubs mentioned.

I’ve still to read it all in detail, but I particularly enjoyed the description of the Three Kings at Hanley Castle in Worcestershire – “one of the last of that old generation of English drinking houses, where the barbarous tide of ruthless sanitisation and garish incivility is held at bay, for now”, and where “a collection of old boys hold court, huddled around the fire of a winter’s eve, swapping the same old stories, but who will strike up a conversation with visitors at the drop of a hat”.

The editorial team appear to be based in Shropshire and so far the focus has been very much on the general area of “West Mercia”, with the three previous issues being centred on Ludlow, Stourbridge and Hay-on-Wye. The fifth apparently is to focus on Rhayader and Mid-Wales – home to some true unspoilt classics – and perhaps they could then turn their attention to Staffordshire and pubs like the Anchor at High Offley and the Red Lion at Dayhills.

The emphasis is firmly on the traditional end of the pub spectrum, and you won’t find any echoey, uncomfortable urban craft beer bars within its pages. But these are the kind of pubs that are intimately bound in with our history and culture, the pubs that Hilaire Belloc described as representing “the last of England”. Let us hope they are still there to be enjoyed when the hipsters have moved on to the latest fad.

I was so impressed that I’ve put a little advert into the sidebar, for which I must stress I have received no payment. It’s not cheap, at £22 for a four-issue subscription, but if you love British pubs and pub culture, it’s a must-read, and something you will keep and return to again and again. I would also suggest it would be a good idea for many pubs to stick a copy in their magazine rack for their customers to read and talk about.

Posted by Curmudgeon at 3:17 pm