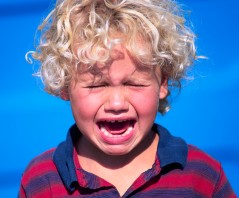 This article by Keith Wildeman was published in the fourth edition of Doghouse magazine and is reproduced here with the editor’s permission. I’m sure it will strike a chord with many.

“A loud child has the unique property of being louder than a loud adult. Not only louder, but more annoying. Grating. Like a slipping fan belt driving down the street at 3am when you’re in bed.”

I’VE NOT GOT ANY kids, nor do I have any real desire to imminently have any. I appreciate that for the human race to continue, there is a need to procreate and bring the next generation into the world. It’s a biological necessity. For this I am grateful, it means there will be future generations to empty our bins, mend our cars, and run off with our money in the banking sector. The world will keep turning just as it is now. What I don’t understand is the need, carried through by some parents, to introduce their young offspring to the haven for all that is adult. The public house.

We’re fortunate in this country that we have a variety of places families can visit. Parks, cinemas, theatres, shops, museums, cafes, swimming pools, public transport – probably about 99% of the public realm – is available for those with children. So why, with all these riches, are some parents not satisfied and decide they need to take their kids to the pub?

There is nothing for kids in pubs. They may find the lights on the fruit machines amusing for a while, be intrigued by the blokes swearing at the bar or investigate the aerodynamic capabilities of a beer mat... or worse half pint glass. But they will inevitably get bored very quickly. They will inevitably lose interest in the half pint of lemonade they’ve been bought to occupy them, and they will inevitably begin to get loud. A loud child has the unique property of being louder than a loud adult. Not only louder, but more annoying. Grating. Like a slipping fan belt driving down the street at 3am when you’re in bed, or James Corden appearing on your telly.

Pubs are meant to be noisy, but the kind of noise generated by hard working men letting off steam at the end of the day, pointlessly arguing about politics or football or which is the best local curry house. Not the screeching noise of a bored child. The noise of a pub also includes plenty of swearing, in the tap room at least. Swearing is not compatible with children. Why should I have to mind my language simply because you chose to inflict your child on me?

Children will also run around. The pub is not a place to run around. If you’re carrying four pints back to your table, and a bloke runs into you, then you’d be rightly aggrieved. He’d be quite correct to expect either a slap round the chops, or an invitation to purchase a new round, or more likely both. Post haste. Children, being less than waist height, are a lot harder to spot, and seeing as giving someone else’s kids a clip round the ear these days appears to be frowned on, parents should take heed not to put their kids in peril of this potential scenario in the first place. By not bringing them to the pub.

There’s also something slightly depressing about kids in pubs. I remember a trip to Rotherham a few years back with City. The pub at the junction of the main road and the road that lead down to Millmoor was called The Miner’s Arms. It was a place that felt trapped in the 70s and had the air of an old working man’s club about it. Formica tables, polystyrene tiles on the ceiling, one large rectangular room with a long bar down the side and a pool table at the end. Racing was on the telly. It was empty. Bar us and a fella with a kid. He had the paper open on the racing pages and was staring intently at the telly whilst also half-heartedly flicking his fingers on some kind of plastic assembled tabletop children’s game, involving a small ping-pong ball, that he’d picked up at the corner shop with his fags. The kid would run after the ball as it kept falling on the floor, place it back in the game, only for it to be disinterestedly flicked onto the floor again. A grim spectacle indeed.

There are also parents who take a haughty affront to their spawn not being allowed on a licensed premises. Not too long ago, in my local – which clearly has a sign by each door stating that children under 18 are not allowed in after 7pm – a woman came in with a toddler around half 7. When told there were no children allowed, she turned on her heels and bellowed with disgust: “What is this, the middle ages or summat?” No love if it was the middle ages your kid would either be doing something useful like ploughing a field or more than likely bedridden with consumption; not disturbing me whilst I’m enjoying a nice pint of Ossett Silver King. This event was trumped some time later when a young lass walked in at half midnight, clutching a baby to her chest and asked if they were still serving.

‘But Keith’, you may be saying. ‘What about dogs? There’s lots of pubs with dogs in, aren’t they an equal menace? Are you happy for dogs to be in pubs and not children?’ Yes, of course I am. Dogs are great, they add to the atmosphere, they don’t suck the life out of it.

Most importantly, dogs know their place, they know we’re their masters. Children on the other hand demand to be in charge and in these days of rampant consumerism and increased competitiveness between parents to have the latest pram/toys/trampoline abomination in the garden, they call the shots. This, quite simply is not compatible with a pub environment. Pubs are a refuge away from such things. That’s why they’re there.

So, if you’ve got kids, do us pub-goers a favour, don’t be so selfish, think of others and don’t bring them. Enjoy the 99% of other places you’re free to visit, and leave the pubs for the adults.