Seen but not heard 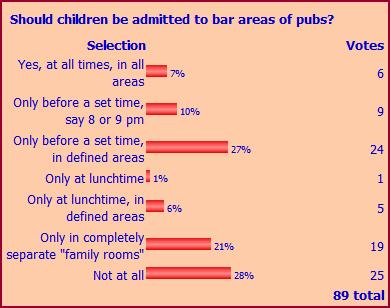 Well, the poll on admitting children to pubs has now closed, with an impressive 89 replies, although not quite as many as the Spoons poll. 49% of respondents took the view that children should not be allowed in bars under any circumstances, and 82% reckoned they should at least always be restricted to defined areas. And, for the six people who thought there should be no restrictions at all, do you really think it is responsible parenting to have your toddler in a pub at 10.30 pm?

There’s been an extensive and, er, lively discussion on the previous post, so I will just make a couple of further observations. It is not in any sense anti-children to not want to be in their company every hour of the day. And I just don’t get the argument at all that bad behaviour from adults is far more common. Maybe I go in the wrong pubs, but I’m struggling to recall the last time I witnessed adult misbehaviour. The other night I attended a CAMRA Pub of the Month presentation in a pub in one of the more down-to-earth areas of Manchester. The pub was packed, a lot of beer and other drinks were consumed, yet I didn’t notice a single person step out of line.

And, if you think it’s OK to drag your child into a pub so that you can have a swift pint, why shouldn’t it also be OK to take them into the bookie’s for a quick flutter on the 3.30 at Market Rasen? There is nothing for kids in pubs (unless eating) and nothing in betting shops either. But, oddly, I don’t see those who are keen to allow children in pubs campaigning for the principle to be extended.

Plus, as someone said in the comments, you don’t tend to find young children in gay pubs and bars. Only trouble is, they’re not exactly thick on the ground in the Stockport suburbs.