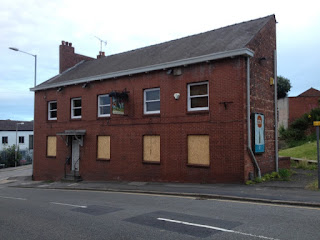 Sad news, although not coming as a complete surprise, that Robinson’s Waterloo just off Hillgate in Stockport has recently closed. Given that all the brewery lettering has been removed, it doesn’t look as though they have any plans for reopening it, and I’d be very surprised if any other buyer came in to run it as a pub.

It was never an unspoilt gem, and had an odd layout whereby the positions of vault and lounge had been reversed at some point in the past, leaving the long bar counter on the “best side”. But it always seemed to have a good community spirit, and won at least one CAMRA Pub of the Month award. A claim to fame was that it was opposite the erstwhile Strawberry Studios, and many famous musicians had been spotted enjoying a pint in there over the years.

Its loss will also reduce the number of pubs serving real ale on the famous Hillgate Stagger to an unprecedented low of seven. Here’s a picture of a relaxed pub dog I took in there on last year’s event. 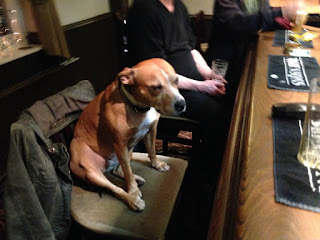 In recent years, Robinson’s have culled a number of traditional urban locals in and around Stockport town centre – for example the Spread Eagle just down the road, the Unity, the Adswood Hotel, the Tiviot and the Grapes in Edgeley. Apart from the Flying Dutchman further up Hillgate, which has been revived as the Fairway, none of the others have been taken on as pubs by new owners. The Railway in the centre of Whaley Bridge, a similar type of pub, has also recently bitten the dust.

To be honest, they largely seem to have largely given up on this segment of the market in favour of craft beer and dining pubs, and this is shown by their apparent unwillingness to offer any kind of financial support package to their tenants to allow them to be more price-competitive. As I wrote here, Robinson’s were never a particularly cheap brewer, and now that their main competitors in Stockport are no longer the Big Six breweries but Wetherspoon’s, Sam Smith’s, Holt’s and independent free houses, their tenants are left very exposed.

On Castle Street in Edgeley, Punch Taverns have recently carried out an expensive and thoroughgoing refurbishment of the Sir Robert Peel. Not my cup of tea, but it’s smart, well-thought-out and clearly appeals to its target market. It also offers Fosters and John Smith’s Extra Smooth for £2 a pint, all day, every day. As I wrote here, while the nearby Armoury is in pretty much every respect a far superior pub, if it’s charging a quid more for a pint, how can it compete for the trade of cost-conscious drinkers? Don’t forget that, while it may be cask beer that you see as defining a pub, most beer sold in pubs is lager, and without a strong lager-drinking contingent very few pubs would be viable. 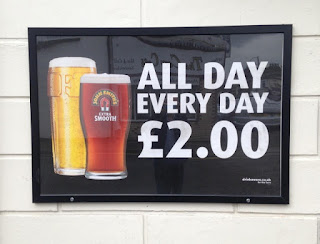 I’m not going to put the kiss of death on any particular pubs by naming them, but there are still quite a few that it’s not hard to see going the same way.