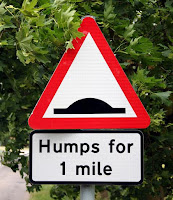 Over the past thirty years, humps seem to have multiplied inexorably across the roads of Britain. Some see them as a valuable tool to improve safety and produce a calmer environment, while others regard them as essentially a malicious impediment to road users that result in nothing but frayed tempers. No prizes for guessing which camp I fall into. I’m entirely with newspaper columnist Tom Utley when he says “Just as the private car is the embodiment of the concept of freedom, in metal and rubber, so the speed bump represents in tarmac the essence of regulation, nannying and political interference.”

But, whatever you may think of them, it can’t be denied that humps are a very effective method of diverting traffic to other routes. Providing that the alternative is free-flowing, drivers will go out of their way to avoid a humped road. And – whisper it softly – this may have been a factor in the demise of more than one pub.

It may be politically incorrect to say so, but outside of town and city centres, the vast majority of customers visiting pubs who haven’t walked there will have arrived by car. Once you have decided to use the car, you will have a wider choice of potential pubs available to you than if walking, and the ease of getting there is a consideration in which you plump for. It may even be a subconscious factor, but given two pubs of roughly equal attractiveness, the one that involves crashing over a half-mile obstacle course starts to seem less appealing.

One pub where I’m sure this has been a factor is the High Grove in Gatley, which closed earlier this year. I wrote “its potential must have been severely damaged by the installation of a particularly vicious traffic calming scheme on both approach roads about fifteen years ago, which would have been a major deterrent to developing any destination food trade.” The traffic calming effectively meant it lost any chance of appealing to out-of-area customers.

In the 1980s I remember visiting the then newly-opened Shady Oak in Bramhall for lunch when working nearby, but afterwards the estate on which it was situated received “the treatment” and it wasn’t long before it went evenings-only during the week*. And the dramatic pub carnage in Mottram and Broadbottom, with seven out of eight having closed, surely can’t be entirely unrelated to another severe hump scheme installed during the Nineties.

Basically, if your pub is in a location that has been “calmed”, you effectively abandon all hope of attracting outside trade if there are any nearby alternatives.

*Although I see from the WhatPub entry that it now opens at noon every day. But, perhaps ominously, it’s owned by New River Retail