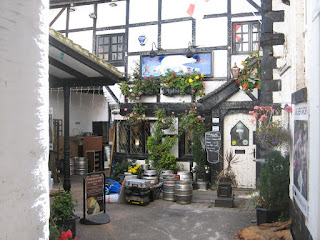 I was recently in Whitchurch, Shropshire, and spotted the very appealing-looking White Bear, tucked away in a courtyard just off the central square. It was briefly closed for refurbishment, so I didn’t venture in, but it certainly looked tempting. 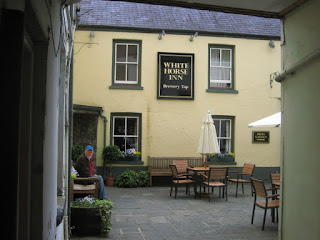 I have always been intrigued by these rare “courtyard pubs” which convey a sense of cosiness and intimacy secluded from the hustle and bustle of the main streets. Another one is the White Horse in Llandeilo, Carmarthenshire, brewery tap for Evan Evans Brewery, which I visited last year. A third one that springs to mind is the Rose & Crown in Ludlow, once tied to Wem Brewery, which has recently been taken over and reopened by Joules. They do seem to be something of a speciality of the Welsh Marches and rural Wales.

The Old Starre in York, famous for its inn sign spanning the street, used to very much of this type, although now thoroughly modernised and deprived of most of its original character. Similar, although not quite the same kind of pub, are the historic galleried coaching inns such as the George in Southwark and the New Inn in Gloucester, and Whitelock’s in Leeds is a city-centre luncheon bar down a yard off the busy shopping thoroughfare of Briggate.

The Golden Cross in Shrewsbury, now more a restaurant than a pub, is down a narrow passage off the High Street, while the Boot Inn in Chester, while now extended forwards to Eastgate Row, used to be similarly only accessible via a passageway.

Are there any more that spring to readers’ minds?