Lashed to the wheel 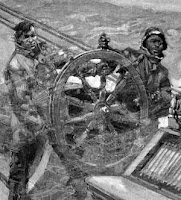 Greg Mulholland was one of the few Liberal Democrat MPs to survive the carnage of the 2015 General Election. Since his original election in 2005, he has sought to present himself as “The Pub Champion”, but to a large extent this seems to have involved championing tenants against pubcos, and demanding tighter planning controls, rather than standing up against the more general factors that have affected the overall demand for pubs. Specifically, I’m not aware he has any particular track record on opposing the smoking ban.

He’s recently given an in-depth interview to the Morning Advertiser in which he has raised the possibility of “super-ACVs” under which pub owners would be compelled to sell pubs to community groups or alternative owners at their valuation as a pub rather than the potential redevelopment value.

Now, I recognise that pubs can have a value as community resources that transcends narrow financial considerations, and that ACV listings, if properly applied, can give them a valuable stay of execution if they are threatened. I’d also support pubs being given protection from being turned into shops or offices without needing planning permission, subject to a reasonable minimum time limit of trading as pub.

But it has to be accepted that society changes and moves on over time, and that most of the current issues around planning and redevelopment are symptoms of the general decline in the demand for pubs, not its cause. It is simply unrealistic to believe that pubs can be preserved in perpetuity if the underlying demand is no longer there. In a recent blogpost, RedNev asked the question as to who says a pub is unviable, but surely at the end of the day the only test is whether someone can succeed in running it as a profitable business.

Any economist worth his or her salt will confirm the general progress of the economy depends on shifting the allocation of assets to more productive uses. If a pub is only worth £300k as a going concern, but £2 million if the site is redeveloped as housing, then arguably society as a whole benefits if it is used more remuneratively. A pub isn’t just a building, of course, it’s also a parcel of land, and very often, on larger sites it’s that where the additional value is to be found. Mulholland’s idea is likely to lead to already struggling pubs being passed on between a succession of ever more unrealistically starry-eyed owners before someone eventually gives up the ghost.

It also raises the question of who, at the end of the day, stands to benefit from redevelopment. If a pubco is forced to sell a pub at current valuation to another operator, or a community group, but a few years down the line it proves unviable, then they will rightly feel aggrieved if they lose out on the profit. And I wonder whether, in a few years’ time, we’re going to see the trustees of some of the current crop of community buy-out pubs that are being championed by CAMRA seeking to sell them for housing or redevelopment when they realise that, with the best will in the world, they simply can’t be run profitably.

Sadly, by seeking to ossify the current structure of the pub trade, Greg Mulholland is less the champion of pubs than the enemy of their long-term prospects.