Last week, I ran a poll which showed that a large majority of respondents thought that beer in British pubs was typically too dear. So, as a follow-up, I asked exactly what they would define as “too dear” for a pint of ordinary bitter. There seems to be something of a north-south divide in the results, but two obvious spikes at £3.50 and £4.00. Overall, 48% thought a pint had become too expensive by the time it reached £3.50, while 90% felt that way at £4.00. 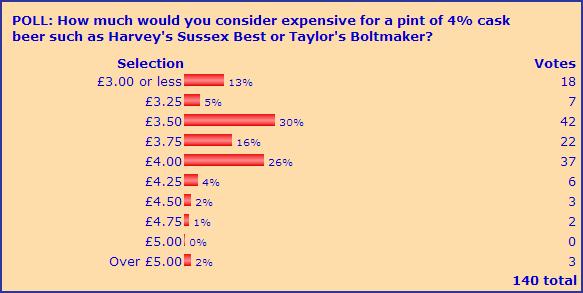 I was recently in a pub on the fringes of the Peak District and ordered a pint of Taylor’s Landlord. I was expecting to pay maybe £3.30 or £3.40, and was slightly taken aback to be charged £3.70. For a one-off with a meal, you wouldn’t mind too much, but if it was your local you might be inclined to cut back a bit. You have to wonder about the three people who answered “over £5”. Even in London that suggests more money than sense. Or maybe they were just wind-up merchants.

The comments also brought up a couple of tangential points. One is that, whenever such a question is asked, someone always replies “depends what beer it is”. But, in practice, there isn’t much of a price differential between cask beers of the same strength in the same pub, and surely implicit in the question is the assumption that we’re talking about a beer you’d actually want to drink and is in acceptable condition.

I was also taken aback to see both Taylor’s Boltmaker and Harvey’s Sussex Best described as “mediocre, characterless beers”, with one commenter saying “I probably wouldn't choose to pay a penny for either of these beers unless it was the only option on a cruise ship or something.” The intention was just to ask a question about people’s general view, but I deliberately chose these ahead of more commonly available brews such as Doom Bar and Bombardier as they were beers widely regarded as top examples of the style. If you really don’t think much of these, are there any pale beers of 4% or less that you actually do like, or are you such an extremophile that nothing in the category appeals to you?