Following my recent post about the rise of family dining pubs, I thought I would ask readers what types of pubs they had visited recently. This poll gained an impressive 156 responses. 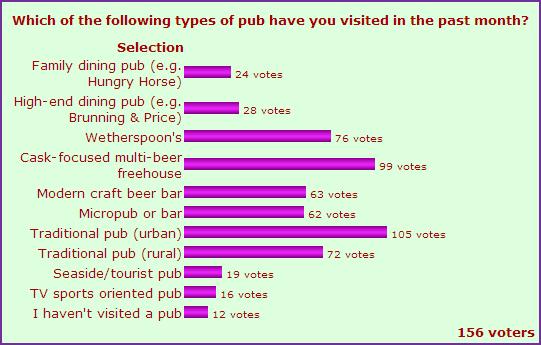 Gratifyingly, “traditional urban pub” topped the scores, with “cask-focused multi-beer freehouse” a close second. Wetherspoon’s was third, with “traditional rural pub” encouragingly coming in fourth. Every category of pub got into double figures, with “TV sports oriented pub” coming in last with 16 votes. Obviously more a reflection of blog readers than British pubgoers in general, but interesting nonetheless.

The question was raised in the comments as to why I had elevated Spoons to a pub category in their own right rather than just a brand. The answer is that they have effectively created their own niche. I could have called it “Town-centre value pub (e.g. Wetherspoon’s) but everyone would have known what I meant. There have been limited attempts at creating clones, such as the Goose chain, and some of the pubs recently disposed of to companies such as Hawthorn Leisure have continued with a similar trading format, but basically that particular category IS Wetherspoon’s.