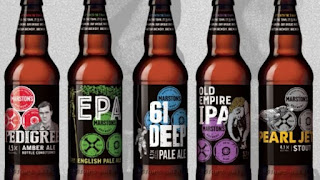 This week, Marston’s have announced a major revamp of their beer branding, as shown in the picture above. However, the initial impression is that they’re trying a little too hard to appear trendy and ape craft beer styling, and it comes across as something of a misstep. There’s always a risk that customers will be confused if the packaging fails to reflect the contents, and someone described it on Twitter as “a traditional brewer trying a bit of dad dancing”. Compare the designs with the distinctive, smart Pedigree label shown below, which in itself was the result of a subtle tweak only last year.

Renaming the classic Burton Bitter as “Saddle Tank” comes across as an error of judgment which will only serve to confuse customers, and opens itself up to the inevitable rather unfortunate rhyme. I’d also say as pumpclips, as opposed to bottle labels, they’re too dark.

I was interested to read an article on how to design packaging to appeal to older consumers, which made the following points:


They prefer traditional tastes to 'experimental' ones. This extends beyond the product to the packaging, which they want to look and feel traditional, rather than appear overly radical or be 'different for different sake'.

They prefer products and packaging that are subtle: ones that are ageless but appeal indirectly to their demographic, rather than those that appear directly targeted at them because of their age.

And it’s important to remember that half the adult consumers in this country are over the age of 50.

Obviously packaging does need to change with the times, but if your intention is to stress tradition and continuity it’s important to do it in a subtle way that respects what has gone before. Otherwise the risk is that it comes across like go-faster stripes painted on a Honda Jazz. You only need to look at malt whisky labelling to see how it should be done.