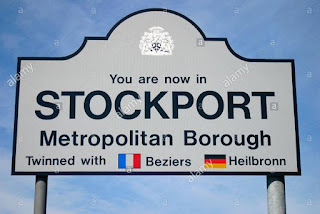 Matthew Curtis recently wrote an article on the Manchester beer scene entitled The City with a Thorn in its Side. Now, in general, it’s a good piece of journalism. He made the effort to get the train up here, get the feel of things on the ground, and interview several key players, including CAMRA stalwart Peter Alexander (aka Tandleman). For readers in Canada and the US, it does its job just fine. However, he repeated one common error that, whenever I see it, makes my hackles rise. He said that Stockport, home of Robinson’s Brewery, was in Manchester.

Yes, Stockport is part of the same conurbation, but it is a town in its own right with a long and honourable history going back to mediaeval times, and has its own very distinct identity. It also retains its own status as a Metropolitan Borough entirely separate from the City of Manchester. Yes, it’s an easy mistake to make, but that doesn’t make it any less wrong.

Part of the problem arises from the naming of Metropolitan Counties in the 1970s. Six of these were set up, but only one of them took the name of its major city. The other five – Merseyside, West Midlands, Tyne and Wear and South and West Yorkshire – didn’t. The area was originally referred to as SELNEC – South East Lancashire, North East Cheshire – but that didn’t trip off the tongue, so the present name was adopted.

However, all too often that tends to lead people to refer to the other major towns in the area as being part of Manchester, when they aren’t. I know someone from Wolverhampton who would go ballistic if anyone suggested that his city was part of Birmingham, even though they are both within the same West Midlands Metropolitan County. Likewise try telling someone from Bradford that it was part of Leeds, or someone from Sunderland that it was part of Newcastle. 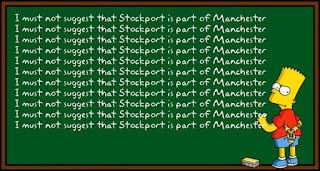 Local pride and allegiance remain very important, and anyone writing about areas should be careful to get these things right. Stockport, and other major towns such as Ashton-under-Lyne, Oldham, Rochdale, Bury and Bolton, may be referred to as being within Greater Manchester, or being part of the Manchester region. But they are not, never have been, and never will be, part of Manchester itself. This page helps explain the situation.

Another glaring error in the article, albeit one of limited relevance to a Transatlantic audience – is the statement that “You don’t have to wander far down a Manchester street to come across one.” Again, this is just plain wrong.

When I moved into this area in 1985, the family brewer pubs were extremely scarce in the centre of Manchester. Lees and Hydes both had just two (and arguably Hydes’ Jolly Angler isn’t really in the centre), Robinson’s one, and Holts precisely zero. Lees, Hydes and Holts have all acquired one or two more, but they’re still far from thick on the ground. And, in the wider city of Manchester, Holts and Hydes have a few scattered pubs, but Robinsons’ and Lees’ pub holdings remain minimal. The nearest thing to a concentration is the string of Hydes pubs along the Wilmslow Road corridor in Rusholme, Fallowfield, Withington and Didsbury. Historically, by far the biggest holders of pubs in Manchester were Wilsons, part of the Watney/Grand Met empire, followed by other members of the erstwhile “Big Six” Whitbread, Bass and Tetley.

These are innocent mistakes, but when it comes to local identities, you do need to be careful not to tread on people’s toes.