Manchester has become well-known for its cutting-edge beer scene, and its craft beer shrines such as Port Street Beer House and Café Beermoth. However, the city centre still has its fair share of “proper pubs” and, on a mild, sunny autumn day, I thought I’d have a stroll round a few of them. It isn’t by any means all bright young things gaily supping overpriced craft beers.

I started off at the well-known historic landmark of Sinclair’s Oyster Bar, relocated from its former location in Shambles Square following the IRA bomb. This is a Sam Smith’s pub but, unusually, offers no real ale. I had a pint of keg Old Brewery Bitter which wasn’t too bad – not nitrokeg soapy, but not too fizzy either. If all keg beer was like this, real ale might well have have disappeared. It has a rambling interior on two levels with plenty of dark wood. I overhead a fascinating conversation from a group of off-duty police officers. In hindsight perhaps I should have tried the 5% keg India Ale which isn’t available in the Sam’s pubs I usually frequent.

I then headed up Withy Grove to the Hare & Hounds on Shudehill, which stands in one of those rows of old buildings that survive amongst all the modern architecture. Formerly a Tetley’s house, this is a small National Inventory-listed pub with the classic “West Yorkshire” layout of central bar, front vault, rear lounge and drinking corridor. It clearly appeals to an overwhelmingly older male clientele, as the photo shows, although there was a blackboard advertising bottles of Prosecco. I hope the two gents featured don’t mind. Three real ales were available – Doom Bar, Robinson’s Dizzy Blonde, and Holts Bitter, which was on very good form and came at the bargain price of £2.20. 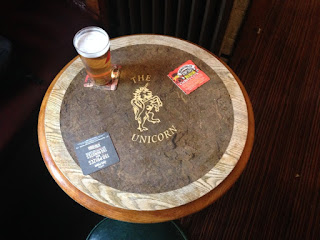 The next pub, the Unicorn on Church Street, was another that attracted an older customer base, although the sound system was incongruously playing punk and nu-metal, presumably chosen by the bar staff. It’s a handsome building with a characterful interior featuring extensive light oak panelling, but sadly looking a little run-down nowadays, although the toilets appeared to have been recently refurbished. Tandleman has written about a recent visit here. It is known for being possibly the only pub in central Manchester offering Draught Bass, but unfortunately on this occasion it was not available, leaving me with a choice of Dizzy Blonde and Bradfield Farmer’s Blonde. The latter was OK but seemed a little tired – probably the least impressive real ale of the day. 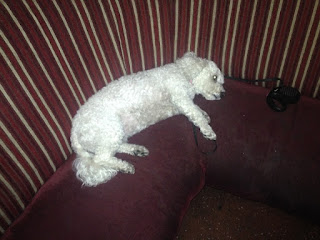 I crossed Piccadilly Gardens and headed down Portland Street to a group of three pubs situated very close together in another small surviving group of modest Victorian buildings. First was the Circus Tavern, billed outside as “The smallest bar in Europe – the biggest welcome in the World”. The bar is indeed tiny - a minuscule quadrant tucked in to the corridor, that still manages to accommodate two handpumps for Tetley Bitter and, yet again, Dizzy Blonde. Opposite this are two small, cosy snugs, in one of which I spotted the pub dog enjoying a snooze on some of the bench seating. I don’t think I’d had cask Tetleys for a couple of years. Now brewed in Wolverhampton, it does retain a hint of the “Tetley tang” but certainly isn’t the beer it once was, although it was in good condition here. This, like the Hare & Hounds, was originally a Tetley’s tied house.

Almost next door is Hydes’ Grey Horse, which is only slightly bigger than the Circus Tavern, but has been opened up a little more, although still retaining plenty of bench seating. A half-moon bar dispensed five Hydes beers, including the staple Old Indie and Original, and the latest from their Beer Studio sub-brand, Tomahawk Challenger, which was surprisingly rich and full-flavoured for a modest 3.9% ABV. It’s worth noting that both of these very small pubs manage to provide proper separate ladies’ and gents’ toilets, in contrast to most of the latest generation of micropubs.

My final call was at Holts’ Old Monkey, on the corner of Portland Street and Princess Street. This has the feel of a Manchester institution, but in fact is a new-build pub dating, I think, from the late 80s, which explains the location of the toilets in the basement. The basic ground-floor bar dispenses a range of Holts’ beers including some from their Bootleg offshoot, although I stuck to the standard Bitter, which again was pretty good. This bar was very dimly-lit, so I headed upstairs, which I vaguely remember from years ago as being fitted out as a lounge bar with bench seating, but now has only loose chairs and tables, plus a pool table. I didn’t much appreciate the hip-hop music being played, though. From here it was only a short walk back to Piccadilly Station for my train home.

So, an interesting encounter with the more traditional side of the city centre’s pub life, most of which I hadn’t been in for years. None of the pubs I visited are in the current Good Beer Guide, although the Grey Horse was last year, and the Hare & Hounds, Circus Tavern and Old Monkey all have been in the fairly recent past. The current edition does still feature some classic pubs like the Britons’ Protection, City Arms and Castle, so it’s certainly not wall-to-wall trendy craft emporiums.

It’s interesting that I was recently musing about local allegiance and the distinct identities of Stockport and Manchester. As befits its function as a regional capital, Manchester feels a much bigger place than Stockport than their relative populations would suggest. A couple of weeks ago, I enjoyed a pub crawl of Stockport town centre with Paul Mudge, and I can’t help feeling that, while Stockport fits me like a cosy, familiar pair of slippers, Manchester does have a distinct metropolitan edge to it.