No pub left behind

It didn’t take long for someone to win the Keg Pub Challenge, when blog reader Matt found that the North Manchester district of Collyhurst recorded a perfect 10 of pubs with No Real Ale. The distinguishing feature of all those pubs is that they unashamedly cater for a local, working-class clientele, although I can remember maybe twenty-five years ago when the Queen’s Arms on Honey Street was briefly something of a real ale shrine. The photo shows the Valley on Glendower Drive, the first result of the search.

It seems to be taken as read that, nowadays, “estate pubs” are keg pubs, but it wasn’t always so. I’m not familiar with those particular pubs, as it’s not my patch, but I’d bet that thirty or forty years ago, some, if not most, of them sold cask beer. I remember in the late 80s my local branch of CAMRA mounting a series of campaigns to encourage breweries to put real ale into some of the few remaining keg pubs. One where we had no success was the Garibaldi in Abbey Hey, Manchester, which was then a Tetley’s pub. Ironically, it recently did start serving real ale before, as reported by WhatPub, being closed on the orders of police. So what happened to cause real ale and the ordinary, down-to-earth boozer to part company?

I’d say the key reason is the shift from saying “the beer in this pub is real” to “this pub sells real beer”. There’s a subtle, but vital difference. In the early days of CAMRA, pubs just sold Mild and Bitter, or two bitters, and the customers didn’t identify it as being real ale or not, although they might notice that the real beer was better. If a pub “went real” it involved changing a keg or top pressure beer over to cask, not adding another pump. Across large swathes of the Midlands and North of England, real ale was more often than not dispensed through electric pumps, so there was no obvious difference at the point of sale.

Not unreasonably, CAMRA took the view that, if real ale was to be promoted, greater differentiation was needed. Most of the well-known beers associated with the initial “real ale revival”, such as Ruddles County and Ind Coope Burton Ale, were cask-only, and CAMRA began to press for separate branding for real and keg beers to avoid confusion.

But I’d say the key changes happened in the early 90s. The transfer of pubs from breweries to pub companies took away a lot of the kudos of being able to say “85% of our pubs serve real ale”, and the pubcos found that stripping it out made life easier for licensees without any loss of trade. Plus the rise of nitrokeg created a distinctive keg product for which there was no direct real equivalent, and which, at least initially, was something that many drinkers would make a point of ordering. I wrote here in 1997 how John Smith’s Extra Smooth was increasingly taking the place of cask bitter as the default choice in many Levenshulme pubs.

Another factor was the ongoing replacement of electric pumps with handpumps, which may have provided a clear and unambiguous symbol of real ale, but at the same time marked it out as a beer apart. If you wanted to avoid something that was inconsistent, potentially cloudy or vinegary, might involve challenging flavours, and tended to be favoured by Polytechnic lecturers with woolly jumpers and beards, you knew not to touch anything that came from a handpump.

In the North-West, we still have substantial numbers of family brewer pubs – Holts, Hydes, Lees, Robinsons and Sam Smiths – where the cask bitter remains the normal ale choice, and is consumed by large numbers of working-class drinkers. But, across the country as a whole, as I wrote here, real ale is increasingly seen as a middle-class drink, and is conspicuously avoided by working-class drinkers, especially the younger ones. Would a working-class bloke under 40 ever even contemplate ordering a pint of cask? And as for “craft beer”… Some might say that just displays how thick they are, but in reality working-class people have a pretty sound nose for pseudery and pretension of all kinds. 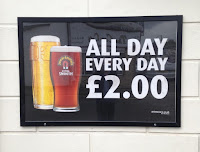 The Bobby Peel on Castle Street in Edgeley, Stockport, received an expensive refurbishment from Punch Taverns earlier this year, which also involved restoring real ale in the form of Doom Bar. But, when John Smith’s is available at £2 a pint, all day, every day, who on earth is going to pay £2.95 for a pint? It fell victim to the inevitable vicious circle of lower demand leading to lower quality, and has now, entirely predictably, disappeared from the bar. And it seems to be very common, as for example reported by Martin Taylor here, that pubs have a token real ale, but the locals just don’t drink it. “I can’t say I saw anyone else buy it, but at least I didn’t get asked if I was CAMRA.”

The question is, if you want to “campaign for real ale”, does it really matter that pubs like the Valley don’t sell it, and realistically are highly unlikely to do so? Indeed, some hardliners might enjoy a touch of Schadenfreude when keg-only pubs close down. To be honest, real ale is only going to succeed in pubs of that kind if it becomes the default ale option, not an expensive speciality. And I don’t really see that happening.