There are about 50,000 pubs in Britain today. CAMRA’s WhatPub online guide lists just short of 36,000 that sell real ale, leaving some 14,000 in the category of “keg pubs”. These often exist under the radar of CAMRA, and other compilers of pub guides, and surprisingly little is known or written about them. 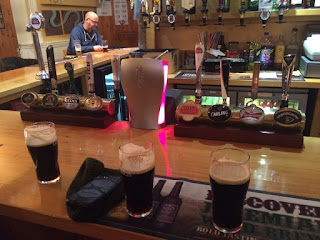 The other day, Jeffrey Bell chanced on one in Folkestone, the Park Inn, pictured above. What is notable about the beer range is not just the absence of real ale, but the absence of any nod to the craft beer movement or indeed the 21st century. Jeff and his companions plumped for Guinness, although I suspect my preference would be Stella or Carling as Guinness tends not to agree with me. Martin Taylor has written about the Vaults, a surprisingly characterful little keg pub in Tenbury Wells in Worcestershire, although that does offer “real” cider.

In the old days of the tied house system, breweries would often offer keg and cask versions of the same product in different pubs. However, with a few exceptions, such as Felinfoel and Sam Smith’s, you don’t tend to see that now. You wouldn’t go into a Robinson’s pub and find keg Unicorn on the bar. Instead, the ale range is likely to be one or more of nationally distributed smoothflow beers such as John Smith’s, Tetley, Boddington’s and Worthington, plus possibly a blast from the past such as John Smith’s Chestnut Mild.

While a large majority of pubs in Stockport serve real ale, there are still some prominent keg-only pubs such as the Town Hall Tavern on the A6, the Jolly Crofter on Castle Street, Edgeley, and the Houldsworth Arms in Reddish. The Jolly Crofter seems to do good business, and whenever I pass it during opening hours there seems to be a throng of smokers outside the front door. And one of Manchester’s most famous pubs, Sam Smith’s Sinclair’s Oyster Bar, remains defiantly keg-only.

By definition, a keg pub is not one that is seeking to attract new customers with an interest in beer, and is probably familiar with people walking through the door, taking one look at the bar taps, and walking out again. And it has to be said that nowadays, with real ale increasingly becoming a middle-class affectation, keg pubs tend to very much appeal to the working class, who of course can spot pretension a mile off.

They may be largely ignored by people who write about pubs and beer, but keg pubs represent a whole swathe of pub life that doesn’t get the attention it deserves.