Last weekend I had an overnight stay in Stourbridge, Worcestershire. It may not seem the most likely tourist venue, but in fact it had been arranged for a pub tour of the Black Country, which unfortunately had to be cancelled at short notice because the mother of the chap organising it had been unexpectedly rushed into hospital. However, given that the weather forecast was good, I thought I might as well go ahead and do a bit of sightseeing on my own account.

On Friday afternoon I enjoyed an excellent drop of Batham’s in the Plough & Harrow at Kinver, where I made the acquaintance of Max, who was happy to just sit there quietly while his owner had a pint. I was told he’s a “golden doodle” – a cross of golden retriever and poodle. 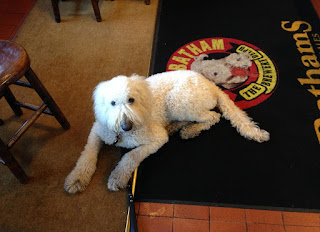 Afterwards I visited the nearby Holy Austin Rock Houses, some of which were inhabited into the 1960s, and may have been Tolkien’s inspiration for hobbit holes. A nice place to be on a sunny Spring afternoon, but I couldn’t help thinking that the National Trust have a bit of a cheek to charge £5.50 for admission. Not that it bothers me as a Life Member. 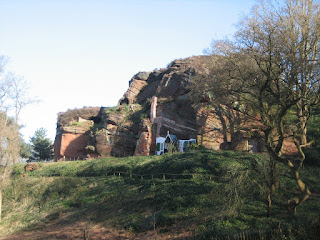 In the evening I popped into another Batham’s pub, the Royal Exchange, which is only a few minutes’ walk from Stourbridge town centre. This really is a splendid little establishment that takes you back to how pubs used to be. The exterior view even exaggerates its size, as in fact all the “pub” part is to the left of the main door – a public bar at the front, a small lounge further back and a beer garden. It was pretty busy, although I managed to squeeze into a seat. Despite it being a cold evening, there were still plenty of groups with smokers in the beer garden. 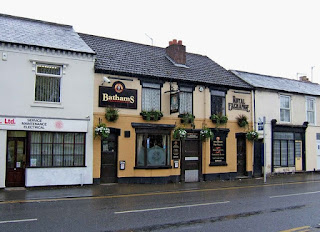 It was striking how at least 80% of drinks were pints of Best Bitter, something rarely seen nowadays. It didn’t disappoint either, and nobody could complain that it wasn’t “pulled through”. Perhaps predictably, the clientele was weighted towards middle-aged and elderly blokes, but there were younger people too and a fair proportion of women. There were several middle-aged couples just enjoying a drink, another sight becoming increasingly rare. This view of the public bar is little changed now apart from the absence of ashtrays. 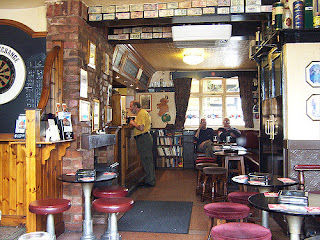 It can be hard to put your finger on it, but it’s certainly noticeable how the character and clientele of pubs vary between different parts of the country. There are plenty of excellent pubs around here, but it’s hard to think of any wet-led ones that would have quite that mix of customers and single-minded focus on beer.

I had visited both of these pubs before over thirty years ago. Back then, each also had a Simpkiss pub not too far away – the Old Plough at Kinver and the Waterloo on the west side of Stourbridge - both sadly now long gone. The Waterloo is now the Bangla Touch restaurant.