Hiding your light under a bushel 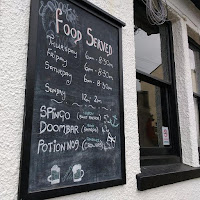 Boak & Bailey recently posted a picture on Twitter of a sign outside the Dock Inn in Penzance listing the beers that are on offer. This struck both them and me as a good idea, especially for pubs that don’t offer a constantly varying range of guest beers where you know you’ll be taking pot luck, but those where a particular beer might tempt you in off the street. In that case, I’d certainly fancy trying the Spingo.

This reminds me of an Opening Times column I wrote back in 2002 which remains just as true today:


Walking around a popular tourist town, I was struck by the way many pubs sell themselves short in trying to attract customers. They may have looked welcoming enough, but there was nothing at all to indicate what kind of food and drink they sold.

In the past, when most pubs belonged to specific breweries, their ownership gave them a clear identity. Not only did you know what beer was on offer inside, but you also had a good idea about what kind of pub to expect, as most brewers had a distinctive house style that ran through their estates. Now that so many are in the hands of faceless pub companies, there’s nothing outside to tell one from another. While it would be a waste of time to display “Punch Taverns” or “Enterprise Inns”, a listing of the major beer brands on offer would surely be extremely useful.

Pubs also fall down in failing to display menus outside, particularly when there is plenty of passing trade on foot. Many people don’t appreciate the wide range of good value food on offer in pubs, and seeing a particular dish on a menu may make the difference between crossing the threshold and going elsewhere. When traditional pubs face such strong competition from branded bar and restaurant chains, they really should not be hiding their light under a bushel.

Fifteen years later, it is still a puzzle as to why pubs are so coy about what is on offer inside. It’s another example of them seeming to imagine that they are exempt from the normal principles that apply to every other type of retail business – the failure to display opening hours being another. I was actually under the impression that restaurants were obliged to display menus outside, but presumably pubs don’t think that applies to them. It can often take only a very small cue to trigger the decision between going in and walking by.

It’s also interesting to reflect on the point I made in the top item.


Obviously no official publicity campaign extolling the virtues of the swift half, or saying “the world’s a better place after a couple of pints”, is likely to be forthcoming. All we can look for is that social changes will over time reduce the attractiveness of heavy drinking to the young, as the talkies did in the 1930s, and rock’n’roll and coffee bars in the 1950s, and hope that process will not drag down many traditional pubs in its wake.

It’s certainly true that social changes have led to a dramatic fall-off in drinking, both heavy and light, amongst the young, which was hard to foresee back then. But, sadly, it hasn’t resulted in a renewed vogue for the “swift half”.
Posted by Curmudgeon on March 19, 2017