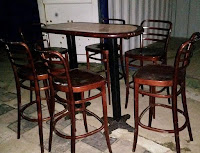 In my recent write-up of the James Watts in Cheadle, I complained about how high-level “posing tables” accounted for more than half of the seating in the pub. This is a plague that is afflicting more and more pubs nowadays. I suppose the thinking is that they appear modern and trendy, conjuring up visions of bright young things disporting their long, skinny-jean clad legs in a fashionable, cutting-edge bar. But, more often than not, you end up with plump middle-aged folk perched incongruously on high stools.

They spoil the look of the interior of a pub and create an artificial division between drinkers by putting them on two levels. You might say that some people prefer them and should be given the choice, but would anyone walk out of a pub if there were none, and did anyone ever suggest them when asked what they would like to see in a pub refurbishment? It also seems that they appeal to people with an exaggerated sense of their own importance who want to be the centre of attention. The formal name for them is “poseur tables”, which rather sums up their attraction.

Around 1990, there was a fad for putting raised seating areas in pubs to break up large areas of flat floor. However, the realisation eventually dawned that these were very unfriendly to the disabled, by effectively closing off a substantial chunk of the pub to them. You certainly don’t see them in new schemes, and I can think of a few pubs that have had them removed during refurbishments.

Much the same is true of posing tables, which will place people in wheelchairs at a lower level than their friends, and also pose a challenge for older customers with creaky joints. They’re an ugly abomination that should have no place in pubs, and the sooner they’re all consigned to the skip the better. Significantly, I’ve never yet seen a posing table in a Sam Smith’s pub.