While I help run my local one, I can’t say I’m much of a fan of beer festivals as a customer. Standing around in a draughty municipal hall drinking warm, flat beers that I’ve never heard of doesn’t really appeal. I’d much rather have a cool, tasty pint of something familiar in a cosy pub.

However, my attention has been drawn to a beer festival with a difference being run by the Engineers Arms at Henlow in Bedfordshire. This is basically a selection of classic ales from well-known, accomplished breweries. There certainly aren’t any duds on that list. While it might be argued that many are pretty familiar, how true is that in practice? When did you last even see Double Dragon or Tanglefoot on the bar, let alone actually try one? And there are only two permanent Bass outlets in Bedfordshire. 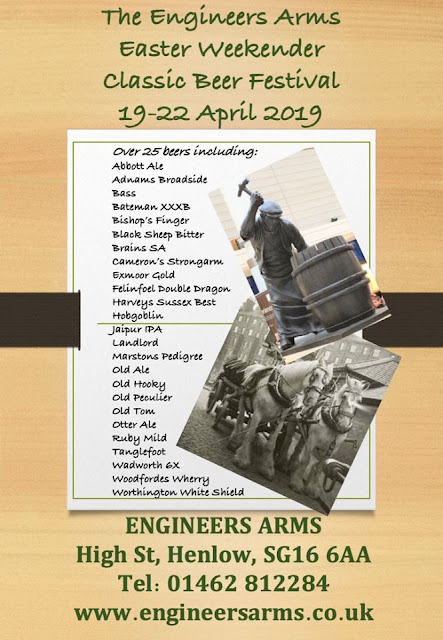 Clearly a beer festival isn’t going to get far if it just offers beers that are already widely available in the local area. But it could be argued it needs some points of reference for customers to latch on to, such as special editions and one-offs from familiar brewers, or beers they’re likely to encounter when visiting other parts of the country. If all they’re presented with is a long list of beers that they have never heard of before, and are unlikely to ever get the chance to purchase again, they may not be too impressed. Perhaps this very obscurity is one of the reasons behind the decline in festival attendances over the past few years.

Maybe more pubs and festival organisers should try this sort of thing. You never know, it might even catch on. If Henlow was a little bit nearer I would certainly be tempted to pay a visit.