We pick up our visit to Huddersfield having left the Slubbers Arms and making our way back towards the town centre. Our next call was the Sportsman, a corner pub near the station in the shadow of the railway viaduct. It’s a handsome stone building, originally built by local brewer Seth Senior (what a name!) and then remodelled internally by Hammond’s of Bradford in the 1950s. Hammonds, who eventually passed into the hands of Bass, became through takeovers by far the largest owners of pubs in Huddersfield. 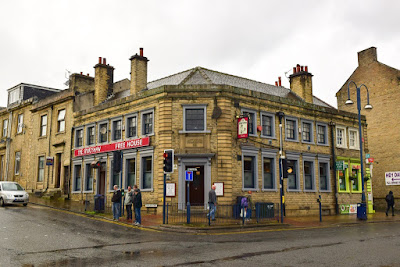 The interior is largely unspoilt, and merits a full entry on CAMRA’s National Inventory. The corner door gives access to a large main bar, with a parquet floor and an impressive curved counter. On either side are a couple of snugs with bench seating. There’s a separate entrance door by the one on the left, which may in the past have been divided from the main bar by a partition. On the wall were a collection of pub plans, although I was unable to get close enough to check whether they were of this particular pub. There were maybe eight or nine beers on the bar, including Boltmaker again, Great Heck Christopher and Buxton Downfall Citra. 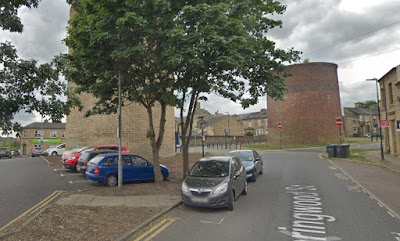 There then followed a rather stiff uphill walk in squally conditions to reach the Grove, the well-known multi-beer free house which overlooks the town centre from the western side. On the approach are a pair of rather sinister-looking windowless brick towers, which it turns out are ventilation shafts for the twin railway tunnels running underneath. It’s another corner pub, with a large bar on the left and a smaller, cosier one to the right. The decor is a mix between traditional and modern and quirky. Although it was late afternoon on a Tuesday, it was very busy. 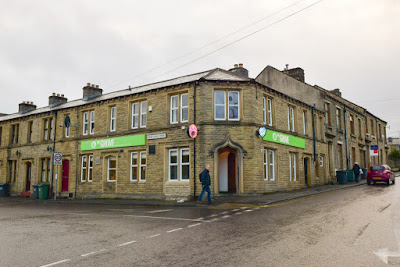 There was a bewildering array of about eighteen different cask beers, from which our selections included Beatnikz Republic Beach Bum, Oakham Citra and Harveys Armada. From such a long list it can be difficult on first look to choose something that will appeal. The pub is known for offering snacks of dried insects, but we managed to avoid the temptation. The conversation turned, as it often does, to the various ailments suffered by older people, but rather surprisingly one of the most impressive catalogues came from one of the younger members of the party still in his early forties.

Fortunately it was downhill from here as we skirted the edge of the Inner Ring Road to reach the Rat & Ratchet, a large free-standing pub on the main road out to Sheffield. A long-standing free house, it is now owned by Ossett Brewery and also sells beers from its own on-site Rat Brewery. Although much opened out, it retains a spacious, rambling interior on different levels, and we managed to find a cosy corner in a room to the rear.

There were about twelve different beers on the bar, from which we selected Ilkley Moor Bah’Rat, Black Rat, White Rat and Marshmallow Mild, all of which I think were all from their own brewery. The Marshmallow Mild certainly had a very distinctive sweet, silky flavour. I made a note of Rainbow’s “Since You’ve Been Gone” playing on the jukebox. We even managed to have a discussion about Brexit without coming to blows.

The original plan had been to go on to the Star, which is a few minutes’ walk further south from the Rat &Ratchet, but as we were somewhat behind schedule, and it was a nasty, wet and and windy night, we decided to head back in the direction of the station. On the way, we passed the Commercial, which looked a lot busier than it had been seven hours before. The two pavilions on either side of the central block of the station are now both occupied by pubs – the Head of Steam on the left, and the King’s Head on the right, which is the one we chose.

This, as befits its former role as a waiting room, is a large, echoey, high-ceilinged room with a smaller ante-room off to one side. Approaching 8 pm on Friday night, it was very busy, and we had to find a seat on the end of someone else’s table. Opposite us were two mature ladies, one of whom was drinking pints of cask, the other cans of Gold Label barley wine poured into a glass. There were about eight different beers on the bar, from which we chose Bradfield Farmer’s Blonde, Oakham Green Devil and Landlord.

I then needed to catch my train home, but a couple stayed on for a curry in a nearby restaurant. In summary, this was an excellent day out, possibly the best of all of these we have done. Excursions beyond the Inner Ring Road in two directions meant that we must have walked at least three miles during the day, some of it up and down some pretty steep hills. The company was as stimulating as always, despite the absence of one or two usual suspects, and the beer quality uniformly good to excellent. Although most of the pubs had a lot of different beers on, the turnover in busy town-centre locations was obviously sufficient to keep them in good nick. We didn’t have a sub-standard pint all day. The one possible caveat was that the beer ranges tended to very much major on the pale and citrusy, so the choice of traditional balanced beers was rather more limited.

Interestingly, the 1978 Good Beer Guide lists nine pubs under Huddersfield, but the only one visited on this day was the Commercial, which back then still just had Old Brewery Bitter, but on electric pump. And that’s not an entry in the current edition.

Thanks again to Peter Allen for the photos of the Sportsman and the Grove.