Refreshing the parts others cannot reach 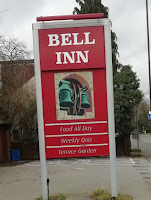 Recently, somebody posed the question on Twitter as to which subjects did not get sufficient attention from beer writers. There were the predictable right-on responses championing increasingly obscure minorities, but one thing that struck me that they rarely touch on is the experience of ordinary, non-enthusiast drinkers.

This is a charge that cannot be levelled at Britainbeermat, whose Life After Football blog regularly chronicles the pubgoing experiences that others cannot, or choose not to, reach. For example, he was recently in the Bell Inn at Tile Hill, Coventry, where he observed:


...considering it is around 2pm on a Monday then there is a reasonable crowd in and a large group of 50/60/70 somethings are making their presence felt in the lounge...

...One of the group was leaving with a walking frame and he was getting plenty of stick with one particular sage warning him not to hit the accelerator button otherwise he’d end up in Canley!

the menu didn’t appear to have any food over £8...

Now, there is nothing particularly special or wonderful about this place, and to be honest it isn’t really a pub that I would choose to spend much time in. But here were people enjoying themselves in a pub at a typically slack time of the week a world away from the “beer bubble”.

Of course, if you want to concentrate on the rare, innovative, unusual and expensive in the beer world, that is your prerogative. Indeed the same can be said of most of the food writing you come across in the media. But it would help if you accepted your enthusiasm for what it is – a middle-class niche interest – and stopped trying to pretend that you were being marvellously inclusive or doing your bit to change the world for the better.

And it must be remembered that, in the early days of CAMRA, this certainly wasn’t the case. They were celebrating beers that were drunk by ordinary people, often in large quantities, without a thought as to their wider significance, and the Good Beer Guide included plenty of pubs described as “Basic drinking pub” and “Unspoilt working man’s local” (both of these in the Salford entry in the 1978 edition). It doesn’t any more.