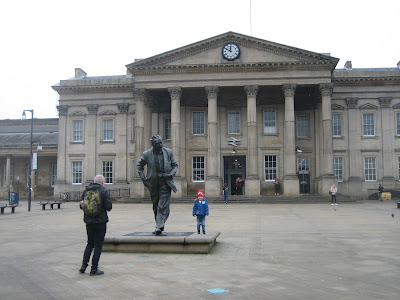 Our latest Proper Day Out organised via the Beer & Pubs Forum took us across the Pennines to Huddersfield on Friday 8th March. While I’ve often passed through on the train, I had never actually been drinking in the town, so this was an entirely new experience for me. On the outward journey, the train took me along the fairly new Castlefield Curve which allows direct running between Manchester Piccadilly and Victoria. Outside Huddersfield’s imposing classically-themed station is a statue of local boy Harold Wilson, and I spotted a father (or maybe grandfather) taking a photo of his offspring as if to say “One day, son, you could be Prime Minister too!” 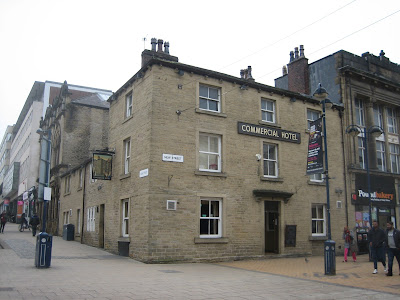 The walk down from the station involved passing three off-licences all advertising Polish beers almost next door to each other. The town centre features a wealth of handsome Victorian stone buildings, whose appearance has been much improved from the 1970s by cleaning away all the accumulated grime from coal smoke. Our meeting place was Sam Smith’s Commercial, a four-square, stone-built pub standing on the town’s main shopping street of New Street, but noticeably older than most of the surrounding buildings. Outside there was a blackboard advertising all the good-value beery delights to be found within. Is there any other pub operator in the country that routinely sells draught beer for as a little as £1.34 a pint? 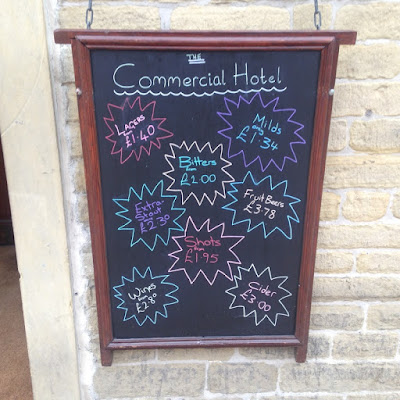 Inside, it has two cosy rooms with bench seating on either side of the front door, plus a longer room with a pool table at the back left running along the side of the bar. It’s one of the nicest Sam Smith’s interiors I’ve come across, and if I lived locally it would certainly become a regular haunt. As always, there was just the one cask beer available, Old Brewery Bitter, at the usual bargain price of £2 a pint, although one of our party chose to have the keg Extra Stout instead. At just after noon, the pub was fairly quiet, but I have previously written about the buzzing atmosphere of booze, blokes and banter later in the day.

A short walk of no more than a couple of blocks brought us to the Albert on Victoria Lane, which had been included by virtue of its unspoilt National Inventory-listed interior. This aspect of it did not disappoint, with high ceilings and impressive wooden bar counters in both top and bottom rooms, the lower one being in a curved quadrant shape. However, as we expected, there was no real ale on, nor did it look as though there ever was any, and so we ended up with three halves of Carling and a glass of tap water, which actually only came to £3.45, suggesting a price of £2.30 a pint. Despite this, it was busy, and we stood for a few minutes until one of the drinkers in the lower room got up and left. Golf was showing on the numerous television screens, with the sound turned down, although nobody appeared to be watching. 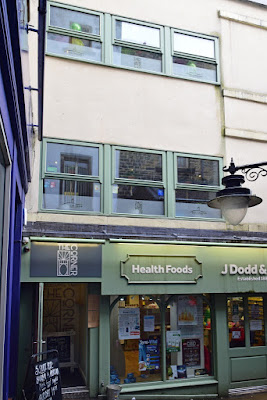 Our next venue provided a complete contrast in the form of Mallinson’s Corner on Market Walk. As the name suggests, it occupies a rather hard-to-spot corner site on a pedestrianised alleyway. The inconspicuous door next to a health food shop opens on to a stairway that takes you up to an airy, square first-floor bar. While unashamedly modern in style, there’s a welcome absence of posing tables, and I quite liked it, finding it reminiscent of those first-floor restaurants above shops you used to see in town centres a generation ago. There’s also a spacious function room on the floor above, where you also have to ascend for the toilets.

As well as a selection of craft kegs, there were six cask beers on the bar, including a mixture of Mallinson’s own and guests. There’s also a wide range of traditional ciders. Those we had included Blue Bee Triple Hop, Mallinson’s Wappy Nick and Wishbone* Tiller Pin. It offers a shortish food menu that isn’t just the usual pub suspects, from which we chose beef brisket baguettes and chicken kebabs with aioli. The food was good, although the presentation of the kebabs was a bit “We Want Plates”. We were told off for trying to order individually rather than as a group. It was busy, with a mixed crowd rather than just obviously craft beer fans, the food presumably being an attraction on a Friday lunchtime. 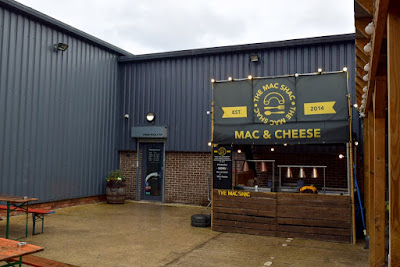 There now followed a longish walk out beyond the Inner Ring Road and along the wide but quiet St John’s Road to the Magic Rock Brewery Tap, which the Good Beer Guide lists under “Birkby”, although it’s easily walkable from the town centre, and nearer than, say, the Blossoms from the centre of Stockport. This has become something of a place of pilgrimage for beer enthusiasts visiting Huddersfield, and the outside yard features a large amount of seating both outside and covered, plus a street food stall, to cater for weekend crowds.

Inside, it’s an archetypal industrial-chic brewery tap, with high ceiling, bare walls, concrete floor and seating almost entirely comprised of posing tables, although we did manage to claim one of the two at normal level. The beer range included a large selection of craft kegs and six Magic Rock cask beers, from which we had Hat Trick, described as a “classic bitter”, and Common Ground Porter. Several very small children were brought in and, although they were well-behaved, this did strike me as somewhat selfish on the part of their parents given that no food was being served, so it was solely a drinking visit. To be honest, not at all my kind of place, but the quality and choice of the beer could not be faulted and it has to be visited as part of a trip like this. 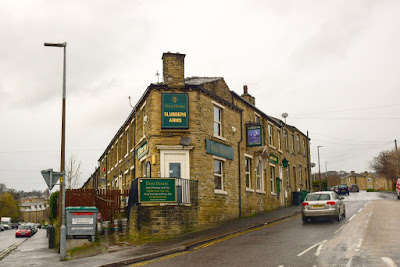 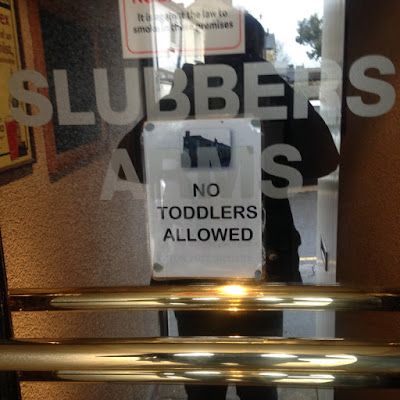 The same could certainly not be said of the Slubbers Arms, which occupies a triangular site on the corner of Willow Lane and Halifax Old Road. The name refers to a traditional wool treatment process. Now this was a proper pub and a half, with the sign on the door giving an indication of the atmosphere to be found within. The main part of the pub is two cosy sections on either side of a horseshoe bar, with bench seating and a real fire on each side. As it didn’t open until 3 pm, we were the first customers, so the fires had just been lit. There’s also a small separate snug in the apex of the building that could be closed off for private meetings. There was a piano in the small ante-room leaing to the toilets. Bizarrely, this pub appears in the Good Beer Guide under “Hillhouse”, even though it’s only five minutes’ walk from Magic Rock. 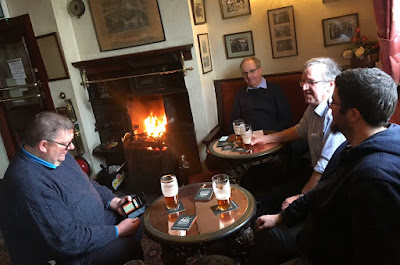 Now a free house, it was formerly a Taylor’s tied pub, and the beer range still centres on Boltmaker and Landlord, together with, on this occasion, Heritage Tremendous and Victoria Pale Ale, and Draycott Lamb & Flag. Interestingly, the three guest beers were all from Staffordshire. The photo, taken by Alex (aka Quosh) shows the assembled company, and the by now blazing fire. All the pints are either Boltmaker or Landlord – just look at those lacings! Definitely the highlight of the day for me, although there were several more excellent pubs to come later, which I will cover in the second instalment.

Thanks to Peter Allen of Pubs Then And Now for the photos of the Corner and Magic Rock and the exterior of the Slubbers Arms. Incidentally, I haven’t made any comment on beer quality, as all of it ranged between good and excellent. We didn’t have a single sub-standard pint all day.

* Incidentally, Wishbone Brewery spectacularly shot themselves in the foot on Twitter by referring to the Carling brewery, featured in the recent TV documentary, as a “piss factory”.