Only here for the beer 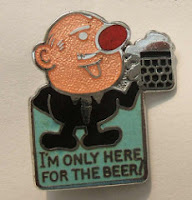 If you asked most people about their reasons for choosing a particular pub, they would list factors such as the company, a relaxing atmosphere, food, watching TV sports, playing pub games or quizzes, or even simply because it’s convenient to get there. But few would say that it was because it sold a specific beer, or range of beers. Yes, beer does matter – they will choose between different beers on the bar, and the beer selection may influence a marginal decision between one pub and other. But few would visit a pub they otherwise didn’t like purely because they liked the beer.

However, if you are what might be called a “beer enthusiast”, obviously the balance of decision-making shifts in the direction of beer. Just how far was tested in a couple of recent polls carried out by Tandleman and myself. On the face of it, these seemed to produce contradictory results, with Tandleman’s poll showing 67% favouring “a fantastic pub” over “a fantastic beer”, while mine, which asked a somewhat different question, said 65% favouring “great beer, dull pub” over the opposite. I then ran a poll on my blog which, with a smaller sample size, came up with one of those pesky 52-48 results in favour of pub over beer. The comments on that poll can be viewed here.

Obviously the answer to a question like this very much depends on the interpretation you put on it, which is what must account for the widely varying results. I did wonder in the comments on Tandleman’s post whether people thought I was having a go at micropubs and brewery taps, but that certainly wasn’t the intention. Certainly these places don’t appeal to everyone, as suggested in this tweet by Matthew Lawrenson:

There are an awful lot of people who will sit on padded kegs in a cramped, freezing metal shed if they think the beer is sufficiently awesome. They're welcome to it, but it's not for me.

However, the simple fact that you are in like-minded company will make you feel at home – a pub being congenial is about far more than just its physical design. I recall someone in my local branch of CAMRA saying “I don’t care what the pub’s like so long as the beer is good”, but you do have to wonder just how many aspects of what he would regard as “pub hell” he would be prepared to endure just to have a pint he liked. Of course, in general, the pubs that offer beer that appeals to enthusiasts don’t tend to have the features that would really put them off, so the conflict of interest doesn’t arise.

It’s sometimes suggested that, in the early days, CAMRA members would often make a point about going in unappealing pubs purely because of the beer. There was some truth in this, especially in areas where the only place real ale could be found was a grotty dump, but the mere fact that a pub is plain and basic doesn’t mean you won’t feel at home there. The truly threatening pubs wouldn’t tend to get much recognition, or indeed many visits. And the other side of the coin was that, far more so back then than now, many attractive pubs that outwardly ticked all the boxes were distinctly cliquey, and you wouldn’t be made welcome if you didn’t fit in.

I make no secret of the fact that I very much come down in the “pub” camp, and as I wrote back in 2010 in a post entitled Wooden Wombs, “at heart I have to conclude I’m more fascinated by pubs than beer”. I’m very much with Mark here:

Dull beer, great pub. Can’t emphasise enough how much difference a comfortable, welcoming, great looking pub makes. I will happily drink whatever is there if the setting is right, on many occasions I’ve been so impressed by the pub that the beer was irrelevant overall.

Forty years ago, I was certainly keen to seek out unusual brews, but that was very much a question of finding them in their natural habitat, not the present-day random selection of beers you’ve never heard of that you’ll never get the chance to try again. And that doesn’t apply if you’re just looking for somewhere to have a drink in your local area. I’ve been fortunate that I’ve always lived in places where there has been a good choice of decent beer in a variety of pubs so I’ve never been forced to make that choice between good pub and good beer.

I’ve described my reasons for going to the pub rather than staying at home as “just to get a change of scene, relax, chill a bit, do some peoplewatching, get some mental stimulation”. Obviously I don’t want to drink bad beer, but that’s not my chief factor in deciding where to drink. I have mentioned before that I regularly visit some Sam Smith’s pubs, not because I think their beer stands out from others generally available in the area, but because their general ambiance makes me feel at home. If they decided to convert their OBB to keg, as some others have, then I might not go so often, but I certainly wouldn’t shun them. If I’m visiting a different area, my first thought is to consult the National Inventory of heritage pubs rather than check the Good Beer Guide for micropubs and brewery taps.

At the end of the day, what makes an appealing pub is highly subjective, and varies enormously between different people. In practice, it’s very rare that people are confronted with a clear-cut choice, on their terms, between “good pub” and “good beer”. However, by putting the beer offer ahead of every other factor when choosing a pub, beer enthusiasts are further emphasising the gulf between them and the general pubgoing population.