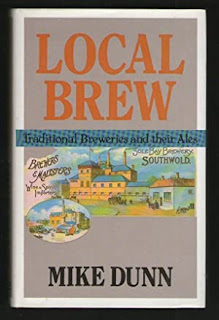 People were recently asked on Twitter to name some of their favourite beer books, and one in my collection for which I’ve always had a high regard is Local Brew – Traditional Breweries and their Ales by Mike Dunn, published in 1986 by Robert Hale. It’s a small-format hardback with a traditional layout of pages of text dotted with line drawings and interspersed with sections of glossy black and white photographs.

Mike Dunn had previously been responsible for the Penguin Guide to Real Draught Beer, published in 1979, which I also still have on my shelves. The main part of this was descriptions of all the breweries then producing real ale, and in Local Brew he expands on this to concentrate on the independent family brewers. At this time, microbreweries were in their infancy and, while the “Big Six” national brewers did produce some well-regarded real ales, most of the beers that were enjoyed and celebrated by CAMRA members came from the family brewers.

After introductory chapters outlining the historical development of the brewing industry, the wave of mergers and takeovers in the post-war period, and the revival of interest in small-scale local production, the book goes on to provide a pen portrait of each of the surviving breweries spread over two or three pages. The author describes its historical origins, takeovers of other firms along the way, the current ownership structure, the extent of its tied estate and the various beers produced. The style is crisp and readable and interest never drags.

In total, there are over 90 breweries listed, over half of which are no longer with us today. However, it is important to remember that, while some such as Vaux were undone by family feuds, only one – Matthew Brown – fell victim to a predatory takeover. The author expresses his concerns over the future of breweries such as Hartley’s and Oldham, which were still in operation bu had been acquired by other family brewers, and Border, which at the time of writing was subject to a takeover battle between Marston’s and Burtonwood.

In my home region of North-West England, there are fourteen breweries listed: Boddington’s, Matthew Brown, Burtonwood, Greenall Whitley, Hartley’s, Higson’s, Holt’s, Hyde’s, Jennings, Lees, Mitchell’s, Oldham, Robinson’s, Thwaites. Theakston’s of Carlisle is listed under the owning company based in Masham, Yorkshire, although by that time it had been acquired by Matthew Brown, who themselves were soon to fall into the hands of Scottish & Newcastle. Yates & Jackson of Lancaster, noted for their superb pale bitter, had been a relatively recent loss to Thwaites, with local rivals Mitchell’s moving into their former brewery which was much better laid out than their own cramped premises.

Only seven of those fourteen plants are still in - existence five as independent companies, Jennings as a subsidiary of the Carlsberg-Marston’s joint venture, and Burtonwood in the shadowy world of contract brewing, having disposed of all its tied pubs to Marston’s and no longer producing any beers under its own brand. Border in Wrexham, also now defunct, can also be considered as an honorary member of the North-West breweries, as it was much closer to them than the other four Welsh breweries in South Wales.

Some eyebrows may be raised at the inclusion of Greenall Whitley but, although CAMRA for a while attempted to include them as a member of an expanded “Big Seven”, in reality they always had much more in common with the bigger family brewers like Wolverhampton & Dudley and Greene King, and of course their empire has now disappeared off the face of the earth. They were the biggest minnow in the pond, not the smallest shark.

By today’s flowery standards, the descriptions of the various beers are fairly terse, but give a general idea of what to expect. Robinson’s Best Bitter (now Unicorn) is described as “a magnificent beer, very pale, but full-flavoured and well-hopped”, but Hydes Bitter (now Original) is “a well-balanced if not especially memorable brew” while the long-defunct Oldham Bitter was “a light-coloured ale with an unusual taste – an acquired taste, in fact.”

The author goes to town with Holt’s Bitter, saying that it is “widely regarded as one of Britain’s truly great draught beers, very dry and bitter, pale straw-coloured and bursting with flavour, it shocks the tastebuds of those accustomed to bland, ordinary bitters, but it is well worth the effort of familiarisation.” I first enjoyed an extended acquaintance with it in 1985 and have to say that, while it was certainly much more bitter than it is now, even then I would have described it as mid-brown rather than straw-coloured. He also refers to Holt’s “extremely low prices”, which are another thing of the past.

In the thirty-five years since the publication of the book, a lot of water has passed under the bridge. Over half the family breweries listed have disappeared, and many of those that remain have sold off numerous smaller pubs and concentrated on an affluent dining trade. Finding a proper down-to-earth boozer tied to a family brewer is much rarer than it once was, although they still do exist, especially in the estate of a certain idiosyncratic Yorkshire brewery. It is much less the case now that your progress on a journey through the country would be marked by the changing brewers’ names on the pub signboards. “Ooh, there’s a Devenish pub, we must be in Cornwall”.

A few years ago on this subject, I wrote:

Of course we have gained something through the massive increase in both the number of breweries and beer styles being produced. But we have also lost something valuable in the way the link between beer and place has been eroded through the decline of family brewers and their tied estates. We should treasure the continued existence of quirky, independent companies like Donnington.

While the family brewery sector is much diminished from 1986, we are fortunate that we still have companies like Palmer’s, Hook Norton, Bateman’s and the two tiny Black Country survivors – Batham’s and Holden’s – who enhance the beer landscape through both their distinctive beers and the character of their tied estates, and provide a continued link with the traditions of the past.

There are plenty of copies of Local Brew available on eBay if you want to get hold of one yourself.