Last month, I wrote about how people had exaggerated expectations for alcohol-free beers. The problem is that, however good they taste, they’re never going to be anything more than a poor substitute for normal-strength beer, simply because they don’t contain alcohol. People choose to drink beer because it is alcoholic; they choose between beers on the grounds of taste. Therefore it makes more sense, and shows them in a better light, to consider them in comparison with soft drinks. 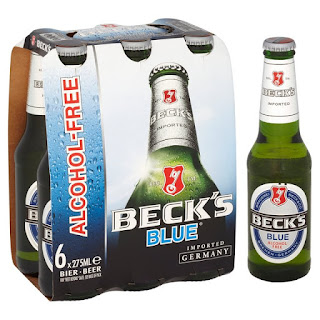 As I’ve been trying to have one alcohol-free day a week, I thought I would give a couple of the best-known brands a try, as an alternative to a can of Pepsi Max or suchlike while settling down to watch The Great War in Numbers or Bettany Hughes on Eight Days That Made Rome. The ones I chose, both bought from Tesco, were Beck’s Blue (6x275ml, £3.49, 58p per bottle, £2.12 per litre) and Heineken 0.0 (4x330ml, £2.49, 62p per bottle, £1.89 per litre). I think the Heineken was on a special introductory offer and the standard price would probably be £3.49. 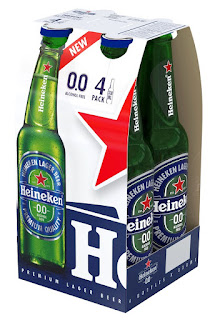 The full-strength versions of these are not beers I would normally buy to drink at home, although I wouldn’t turn my nose up at them. The lack of volume in comparison with standard beers doesn’t really matter too much, as that’s bound up with the alcohol content. Both I found palatable enough. The Beck’s has a distinctly beery initial aroma, and is slightly the drier of the two, but has that somewhat cardboardy flavour note often found in alcohol-free beers. The Heineken, in contrast, is a little sweeter and less obviously beery, but probably the better of the two as a stand-alone drink. It possibly has a hint of lemon in it.

Are they as good as normal-strength beer? Of course not. But would I drink them again in that situation? Probably yes, although not really to wash down my lunch. 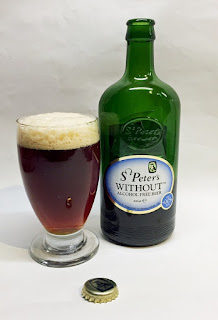 By way of comparison, I also tried an alcohol-free ale, St Peter’s Without (500ml bottle, £1.30, £2.60 per litre). This, however, was distinctly unpleasant, and most of it went down the sink. It had a thin, scummy head which quickly disappeared, and a thick, cloying, glutinous texture. I can’t disagree with Martyn Cornell when he says:


I cannot imagine what St Peter’s thought they were doing, because as a product it’s actively terrible. It smells like raw, unfermented wort, and while there is enough hop usage for it not to be sickly sweet, it’s still too much like the “strengthening medicine” Kanga fed to Roo, and nothing like the refreshing drink beer ought to be.

Martyn’s whole article is well worth reading, as he questions the periodic bouts of enthusiasm about the alcohol-free beer market. From time to time, people claim that it’s going to make substantial inroads into the sales of normal beer, but it never happens, simply because it doesn’t contain alcohol and is therefore missing the point. People will only substitute it for normal beer as a distress purchase. As he concludes,


I’m looking forward to a cool frothy pint of non-alcoholic beer tonight” said NOBODY, EVER.

They’re just not products anyone would actively seek out in the way they do normal-strength beers.
Posted by Curmudgeon at 8:00 am