Meanwhile, back in the real world

The Morning Advertiser has recently published a feature on the leading products in the on-trade for each drinks category. The top ten cask beers are as shown below: 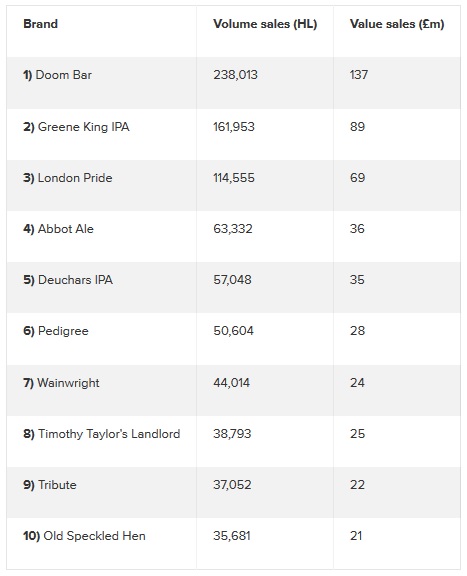 But one thing that springs out is that most of them are beers that many beer commentators and enthusiasts would describe as “bland macro crap”. In this day when all the attention is focused on limited edition single hop beers, one-off collaborations and barrel-aged stouts, it’s all too easy to dismiss out of hand well-known brews from the bigger breweries which don’t assault the tastebuds and may even commit the cardinal sin of being popular.

It wasn’t always so, though. Just flicking through the 1978 Good Beer Guide, it’s easy to find pubs offering only a single everyday beer from the Big Six brewers. For example, the Pebley at Barlborough in Derbyshire had Stones Bitter, the Half Crown at South Benfleet in Essex Charrington IPA and the Parkers Arms at Paignton in Devon Courage Best. They may not have been considered the finest beers in the land, but there was no problem in recommending them and the pubs that served them.

On the ground, it’s still the case that a large majority of the real ale drunk by ordinary people in ordinary pubs consists of beers of the kind featured in the list above. But are some sections of CAMRA* in danger of losing sight of the organisation’s core purpose by looking down their nose at them? There’s a risk that it will become perceived as the Campaign Against Most Real Ale. There’s a fundamental contradiction in an organisation that claims to campaign for something, but in practice often gives the impression of not thinking much of most of what makes up that something. It’s not difficult to imagine someone thinking that, if the local CAMRA bod doesn’t think this Doom Bar is much cop, why shouldn’t I drink Carling instead?

* For the avoidance of doubt, this is emphatically not a criticism of CAMRA per se, just of the impression frequently given by some of its representatives