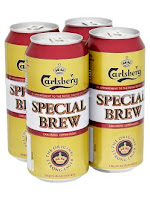 My attention was recently drawn to this particularly harrowing account of the experience of alcoholics in thrall to high-strength ciders and super lagers. Not content with the usual proposal of rationing these products by price, the author decides to go one step further.


There is a more radical solution than trying to increase the price of high strength ciders and lagers and that is to stop producing them altogether. Far from it being a pipedream divorced from financially driven realities, this has happened. One of the most well-known, indeed notorious white ciders was White Lightning, often referred to by those who had experienced its special hallucinatory qualities as ‘white frightening’. Over a decade ago we hosted a visit to one of hostels for senior executives of Heineken which produced White Lightning. Not long after the visit the company reduced the strength of White Lightning and then a few months later stopped producing it altogether. It was a brave move, made without fanfare, for which I remain supremely grateful.

There is a precedent, therefore, that other companies can follow and in doing so lives can be saved. How can it possibly be justifiable to continue producing cheap, high strength ciders and lagers for a market dominated almost exclusively by those with the most severe alcohol dependency problems when it is predicted by health experts that almost 63,000 people in England will die over the next five years from liver problems linked to heavy drinking?

What he’s talking about is not so much banning them outright, but shaming companies into ceasing to produce them. No doubt Heineken, owners of Bulmers, felt that White Lightning was a product that only made up a tiny proportion of their overall sales, and did their public image no good. However, it doesn’t look as though Aston Manor, producers of the similar Frosty Jack’s, have similar scruples, and I haven’t noticed Carlsberg Special and Tennent’s Super, both made by multinational brewers, disappearing off the shelves.

If you do actually want to ban something by law, you have to have a watertight definition, which wouldn’t be anywhere near as easy as people might think. Of course it would be straightforward simply to ban the sale of any beers or ciders above a set alcohol level, which some councils have attempted to do at a local level, but it would seem disproportionate to deprive the general public of the pleasures of Duvel and Old Tom. One solution, of course, would be one I have suggested before, but I suspect the Parliamentary draughtsmen would struggle with that:


Maybe we need to abandon all attempts to be logical and just ask a panel including Pete Brown and Jancis Robinson to make subjective judgments as to what is for the discerning drinker and what for the antisocial pisshead.

In fact, the dividing line between “bad” and “good” is far less straightforward than might be imagined. At the upper end of the premium bottled ale and cider sectors there are several products which, with multibuy offers, can be obtained for around 40p a unit, and whose alcoholic strength must be at least a partial factor in motivating people to buy them in preference to weaker brands. And, even in the “craft” segment, nobody can tell me that the kick given by a 10.5% barrel-aged Imperial stout isn’t part of the reason for choosing it. Indeed, there have been cases where people have over time happily described their craft beer consumption on social media but in effect admitted to being not far off functioning alcoholics.

While clearly high-strength lagers and ciders do have a particular appeal to problem drinkers, they also have a strong following amongst more normal consumers of alcohol who just happen to prefer a trade-off between strength and volume a bit higher up the scale. It is less the case now but, in the past, bottled Carlsberg Special was often viewed as a premium product in the same bracket as Holsten Pils. I remember one couple who used to come into a pub I frequent, where the husband drank pints of bitter and his wife half-pint bottles of Carlsberg.

Their appeal is often not simply low price, but the fact that they provide a relatively easy means of consuming a lot of alcohol. In fact, particularly in the case of super lagers, they’re often not particularly cheap anyway. At the widely-suggested 50p per unit minimum price, a 4x440ml pack of Carlsberg Special at 8% ABV would cost £7.04, which is pretty much what it sells for in my local Tesco. The real bangs-per-buck bargains are to be found lower down the scale in multipacks of Carling and Fosters, which sometimes sell for as little as 50p per can, or 28.4p per unit. But drinking a lot of Carling is much more like hard work.

This indicates that minimum pricing would be a pretty ineffective tool to address consumption of these products, and to have much impact would have to be set at a level that would cause serious pain to the generality of alcohol purchasers. Plus, of course, the higher it was set, the more the problem would be with bootlegging and illegal distilling. As the political philosopher John Stuart Mill said,

Every increase of cost is a prohibition, to those whose means do not come up to the augmented price...

...To tax stimulants for the sole purpose of making them more difficult to be obtained is a measure differing only in degree from their entire prohibition, and would be justifiable only if that were justifiable.

There were alcoholics before these products had ever been invented, and even if they could be made to magically disappear, alcoholics would simply find something else to drink. Of course alcoholism is a serious issue that shouldn’t be swept under the carpet. But surely it should be addressed by targeted measures rather than adopting a broad-brush, whole-population approach that brings large numbers of people into the net who aren’t in any sense problem drinkers.
Posted by Curmudgeon on November 05, 2017