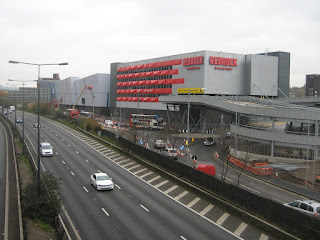 Anyone who hasn’t visited Stockport for a couple of years will be surprised, to say the least, to see the new Redrock leisure complex rising up on the site of the former car park between the M60 and Princes Street. It takes its name from the red sandstone of the cliffs opposite, and is due to open on Friday 24 November, a week today. It will include a cinema, a gym and new shops and restaurants.

The intention, obviously, is to revitalise the town centre and attract more visitors, and it has to be said that much of it is in need of a shot in the arm. The former BHS store on Merseyway is still unlet over a year after the chain fell into bankruptcy, and the area of Little Underbank and Lower Hillgate, which could be a cornucopia of independent shops, is very tatty and rundown, with as many vacant units as live businesses. One clear benefit it will bring is introducing smart chain restaurants including Gourmet Burger Kitchen, Pizza Express and Zizzi, as currently there is a serious dearth of decent places to eat.

Having said this, it’s hard to avoid the conclusion that Redrock falls into the category of “Something must be done. This is something. Let’s do it, then.” It’s unsightly, it’s out of scale with its surroundings, and, although there is a kind of piazza linking it to Princes Street, it’s poorly integrated with the rest of the town centre.

One point that immediately sprang to mind is how the new cinema could hope to compete with those a few miles along the M60 in each direction at Ashton and the Trafford Centre, if people were expected to pay for parking. I have since learned that parking will be free for cinema and gym customers, but how many of them will go on to spend money elsewhere in the town centre? Wouldn’t a better way of revitalising the night-time economy be to allow entirely free parking after 6 pm?

Better parking isn’t an instant panacea for town centres, but making it more inconvenient and expensive is a sure-fire recipe for undermining their viability. Too many councils have treated it as a cash cow and ended up killing the goose that laid the golden eggs. And the fact that the council have introduced free parking after 3 pm and all day Sunday in their central car parks in the run-up to Christmas indicates that they recognise it is a problem.

I don’t claim to be an expert in urban regeneration, and if there was an obvious formula then many towns would have adopted it. I hope it does prove successful in drumming up more business, but I can’t help having some reservations. And it certainly is a singularly ugly set of buildings! it does, however, for those who like such things, feature a rare spiral multi-storey car park ramp.