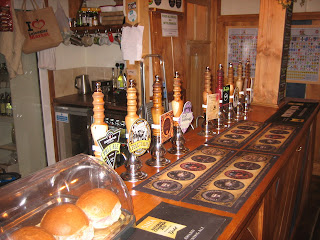 This is a post made by Kieran Lyons, owner of the Blue Boar in Leicester (pictured), on the Beer and Pubs Forum and CAMRA Discourse, which I reproduce here with his permission. It's fair to say I agree with the general thrust if not every single detail.

I've recently had cause to think about the question of how many cask ales to offer at any one time after reading the blogs retiredmartin, pub curmudgeon and beerleeds.

I'll start by outlining what I think affects beer quality.

So how do you achieve best quality consistently? Well, you need people to buy it. So you have to either have or create demand. This can be a bit chicken and egg. What comes first, the ale selection or the ale drinkers?

You have got to put on what sells, and just as every beer is different, there is no typical pub and no prescriptive advice that can be given; but i'm going to have a go anyway and give my thoughts on what pubs should be doing. You may well think of real life exceptions to every rule I make here.

One final point I will make - when you serve ever changing guest beers because that's what your customers demand, you are going to get mixed quality. It's why beer scores don't bother me too much. I don't brew it and I'm not going to take offence if you don't rate it. I won't even get defensive if you say it's in poor condition - i'll try to find out what went wrong.

In general though you learn which breweries to trust and which to avoid. We wouldn't buy a beer off someone new without researching it at least a little bit, and the rule of thumb is to give a new brewery a year to get good before buying.