Sorting the wheat from the chaff 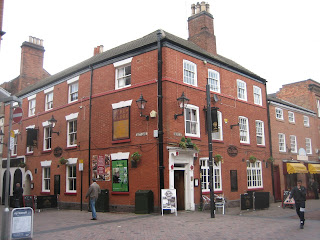 I wrote up last month’s trip to Leicester with what Richard Coldwell rightly described as a “straight bat”. I adopted the style I use for reports of Staggers (local CAMRA organised pub crawls) in Opening Times, where I describe each pub as I find it, but don’t actually make any criticism unless there’s something obviously wrong in terms of quality of beer, food or service. The only thing that fell into this category was the plainly vinegary Old Original in the Globe, which was changed without demur, just as you would expect a well-run pub to do. I recognise the distinction between whether a pub is not to my personal taste, and whether it has fallen short in what it sets out to do.

I have to say I enjoy going on pub crawls of this kind as a leisure activity, visiting new pubs and reacquainting myself with more familiar ones. Every pub has something of interest, whether in its beer range, atmosphere or clientele, and so long as I’ve got a comfortable seat and a reasonable pint, and my ears are not being assailed by pounding hip-hop or screaming children, I’m happy enough. Whether it’s somewhere I’d actually choose to return to is another matter, of course.

As Richard has done an individual post on his blog for each pub we visited giving his own thoughts, I thought it might be interesting to offer some more personal opinions.

As we were buying in pairs, I didn’t take much note of the prices. Nothing stood out as being either particularly cheap or particularly expensive. The one price I do recall is paying £3.10 for two halves in the West End Brewery, which struck me as reasonable for that type of venue.

In conclusion, I have to agree with Richard that Leicester overall proved a little disappointing. Plenty of decent pubs, but not a lot that was outstanding in terms of either beer or historic interest. From experience, I’d say that Derby and Nottingham, which are cities of a broadly similar size, have more to offer on both fronts.