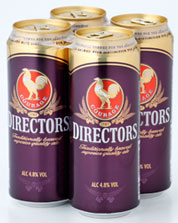 Given all this talk of cans, I thought I would try the canned version of one of the premium bottled ales I had enjoyed – Courage Directors. Many canned premium ales have a softer carbonation than the bottled version in an attempt to replicate a “draught experience”, which to my mind doesn’t really work and just tends to leave them seeming a bit flat, but this wasn’t the case here. It formed a tight, lasting head and there were obvious spires of bubbles rising in the body. The general experience was very similar to the bottles, a good robust English strong bitter, malty yet dry, and you would be hard pressed to tell the two apart.

However, you don’t really save much compared with the bottles. Morrisons have a long-running offer of four premium bottled ales, including Directors, selling at £1.75 each, for £5.50, whereas the four cans were £5.19. This is 54p a unit, so Don Shenker will be happy. Oddly, some of the four-packs of cans were actually dearer than four bottles. Abbot was £5.60 and Hobgoblin was over £6 – both beers included in the offer. It’s noteworthy just how many of the best-selling PBAs are now also available in cans, such as Pedigree, Tanglefoot, Old Speckled Hen, Bombardier and London Pride.

Another interesting piece of psychology is how people are quite happy to buy four-packs of cans (or even 15-packs) but when buying PBAs they will generally get a variety. And someone buying a single PBA is a moderate, discerning drinker, but someone buying a single can (which are only sold by corner shops, not supermarkets) gives the impression of being one or both of poverty-stricken and an alcoholic.
Posted by Curmudgeon on February 08, 2011