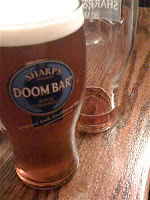 Much has been said on Pete Brown’s blog about Molson Coors taking over Cornish brewer Sharp’s, producers of the rapidly growing (although in the eyes of many rather dull) Doom Bar Bitter. At a time when mass-market lager is a declining and increasingly commoditised business subject to severe price competition, it makes sense for a major brewer to seek to get into the higher-margin section of the market aimed at the more discerning and generally better off consumer. Very often, it is much easier to do this by acquiring existing businesses operating in that segment rather than building your own brands from scratch. You can see parallels with Cadbury buying Green & Blacks, and Coca-Cola acquiring a stake in Innocent Smoothies. But you have to be careful that you don’t kill the golden goose by eroding the qualities that made the brand a success in the first place.

Beer overall would benefit from Molson-Coors and the other international brewers becoming strong competitors in the cask and premium bottled markets. But somehow I don’t think they will. The precedent of what happened to Ruddles after being taken over by Grand Metropolitan is not exactly encouraging, and nor is that of Theakston’s or Boddington’s.

I’m certainly not a subscriber to the “tall poppies” school of beer appreciation, and I’m not saying that it is impossible for large corporations to be conscientious stewards of respected “authentic” premium drinks brands – this has been the case with Scotch malt whisky distilleries. But it never seems to happen with beer.
Posted by Curmudgeon on February 03, 2011