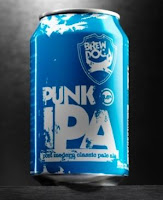 Well, it seems that most readers don’t very much. I asked the question “Do you drink canned beer?” and the 76 responses broke down as follows:

Not a huge wave of enthusiasm there, although 55% were at least occasionally willing to fork out their own money for canned beer, and only 21% would refuse a can if offered one at a friend’s house or party.

I’m not trying to be a cheerleader for cans – and my answer was “occasionally” – but it is worth pointing out that cans do have advantages over bottles in terms of better recyclability, lower weight (thus reducing transport costs), more space-efficient storage and protecting beer from light.

If the taste issue can be overcome, which my recent sampling of Courage Directors suggests is possible, then I can see an increasing number of “quality” beers appearing in can in the future, although there are still a lot of preconceptions to overcome. As on other issues, BrewDog are putting their nose out in front – it will be interesting to see how many readers will be trying canned Punk IPA once it hits the shops.
Posted by Curmudgeon on February 12, 2011