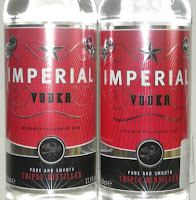 The BBC reports that there is a growing problem of “fake alcohol” being sold in off-licences. Apparently up to a quarter of licensed premises in some parts of the UK have been found to have counterfeit alcohol for sale. It rather jars, though, to hear this described as “fake alcohol”, when in reality it is mostly fake vodka, with some fake whisky and wine. Nobody ever goes into a shop and asks for “alcohol” – is this an example of a subtle campaign to paint alcohol as a generic drug rather than a vast spectrum of different beverages?

The report also ignores a rather large elephant in the room – why, do you think, is it so lucrative to sell fake alcoholic drinks in the UK? Here’s a clue: “Alcohol fraud costs the UK around £1bn a year in lost revenue, according to government estimates.” High taxes inevitably create an incentive for fraud.

And I heard someone saying on the radio this morning that one of the main problems with fake vodka was that it had a higher ethanol level than normal vodka. Given that ethanol=alcohol, it’s not really a problem for the purchaser. Anyway, if you want to avoid being hoodwinked, maybe the best way is to stick to beer. Or just don’t buy any wine or spirits from dodgy corner shops.
Posted by Curmudgeon on February 15, 2011