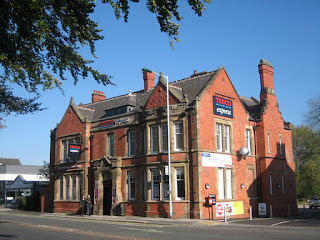 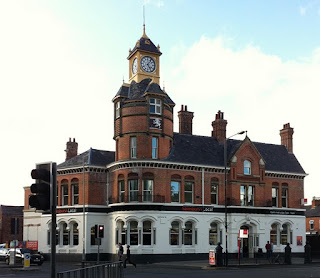 Here are a couple of photos of prominent local pubs that have recently been turned into supermarkets – the Chapel House in Heaton Chapel (top) has become a Tesco Express, while the rather splendid White Lion in Withington is now a Sainsbury’s Local. It must be said that neither was a recent closure – the White Lion had probably been shut for well over five years, and the Chapel House went through several barrel-scraping incarnations as the Tut’n’Shive (sometimes referred to as the Tub’o’Shite) and Conor’s Bar before finally closing its doors a couple of years ago.

As I discussed here, this seems to be a growing trend. However, obviously it wouldn’t be happening if the pubs had been viable and thriving in the first place. Tesco et al are not causing it, they are simply coming in afterwards and picking up the pieces.
Posted by Curmudgeon on October 18, 2011