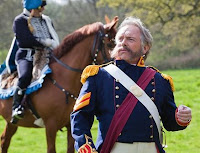 I seem to have got the idea into my head that Wells’ Bombardier is a beer I don’t like. I tend to feel it has an unpleasant, cloying maltiness that really isn’t to my taste. But, I have to say, on at least three occasions over the past twelve months, I have ended up with a pint of it as it was the least bad option on the bar, and actually found it quite enjoyable. And – dare I say – the cut in strength from 4.3% ABV to 4.1% actually seems to have made it lighter in body and more palatable. It’s got to the point now where I may even actively prefer it to some other mainstream beers on the bar.

Having said that, I was recently in a (decent enough) pub where the beer range was Bombardier, Everards Tiger and Hobgoblin. Does that not perfectly define “dull and predictable”?
Posted by Curmudgeon on December 27, 2011