Class in a glass 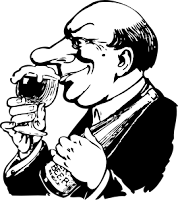 There have recently been a few postings on beer blogs discussing the issue of when the appreciation of unusual and expensive beers turns from simple enthusiasm to beer snobbery, such as here, here and here.

A point that was made was that some of this was tied up with the British class system, and it wasn’t anywhere near so prevalent in other countries. However, I have certainly got the impression that food and drink snobbery was alive and well in the USA, and indeed was often accentuated by being tied up with the “culture wars” that are a much more pronounced feature of that country’s society. This was confirmed by this piece I unearthed about food snobbery, which has very clear echoes of the way many craft beer devotees enthuse about their favoured brews:


Whereas you’re keen on Granny Smiths, he insists that you haven’t even tasted an apple until you’ve sampled a Newtown Pippin...

...Artisanal. Adjective suggestive of handmade goods and old-fashioned craftsmanship. In the food world, a romantic epithet bestowed upon the cheesemaker, breadbaker, bacon-curer, etc., who labors in his or her integrity-steeped native locale, independent of the pressures and toxicities of Big Food, to produce exquisite high-end, SMALL-BATCH edibles available by mail-order.

“The farmstand’s shelves groaned with a dazzling array of artisanal pickles.”

To my mind, anyone who ever uses the term “artisanal” in a food and drink context is unquestionably guilty of snobbery.

The pieces on the same site about rock snobbery and wine snobbery are also well worth reading.

Much of this modern snobbery is not driven by social-climbing affectation, as was often the case in the past, but by a genuine belief that one is being a champion of quality in food and drink, and indeed in other aspects of culture. But this can easily turn into a rancorous and patronising denigration of those – often from a working-class background – who do not share your heightened appreciation. Ironically this often comes from those who would consider themselves as having a left-wing political outlook. It’s far from uncommon to read denunciations in the columns of the Guardian and the Independent of people who swill Carling and eat Big Macs and pizzas from Iceland. If only we could have a society where everybody could afford to buy polenta from Waitrose!

In beer terms, I would say the key factor differentiating the snob from the mere enthusiast is whether you feel a sense of superiority over the unenlightened by choosing the expensive and exotic, or whether you just think “each to his own”.

I also came across this blog post about beer snobbery. Some of the “types of beer snobs”, particularly the “Beer Führer” and “Beer geek” are all too familiar.
Posted by Curmudgeon on December 21, 2011