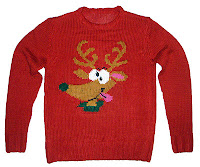 There has been an outburst of manufactured outrage about Beachy Head Brewery naming a seasonal beer Christmas Jumper. This, it is claimed, is offensive to those unfortunates who take their own lives by jumping from said headland.

In a sense that is true, but it isn’t referring to any individual, and in any case much of the best humour has a dark edge to it and to some extent plays on our inner fears. Very often the funniest things you see are the viral text message jokes you start getting a few hours after some “tragedy” in the news.

It seems today that the acceptable subjects for humour in public are becoming so circumscribed that you can listen to some so-called comedians without even raising a smile.

In any case, the brewery’s story that they originally named a beer after the well-known unwanted gift of knitwear and only then realised it had another connotation seems entirely plausible. If any other brewery had done it, nobody would have batted an eyelid or spotted the alternative meaning.

The people complaining about this are probably the same politically correct, humour-free “legions of the perpetually offended” who were whingeing yesterday about Jeremy Clarkson suggesting in obvious jest that public sector strikers should be shot.
Posted by Curmudgeon on December 02, 2011