Jumping on the wagon 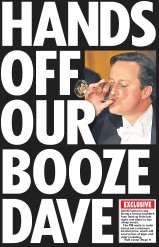 The Daily Telegraph reports today that Call Me Dave is actively looking into the introduction of a minimum unit price for alcohol. I’ve gone through the arguments against this at length in the past – it is wrong in principle, even on its own terms it won’t work, and it is against EU competition law anyway. Several other bloggers have criticised the plan this morning – I thought Cranmer (not one of my usual sidebar links) offered one of the best summaries.

Perhaps part of Cameron’s thinking is to pick a fight with the EU, although it is unlikely that many of his natural supporters will be with him on this one, and ironically it would give UKIP the opportunity to open up some more clear blue water.

And can we expect Labour, which historically has claimed to be the champion of the poor, to fight him on this? I strongly suspect they will do so just as strongly as they stood up for working-class pubs and clubs in 2007. Mind you, it’s unlikely to affect the price of Chianti, is it?

Edit: and I see the Telegraph in its editorial column is not at all keen. Could this be the Coalition equivalent of Blair’s “marching yobs to the cashpoint”?
Posted by Curmudgeon on December 28, 2011