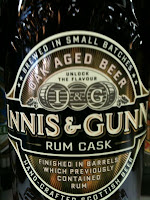 Innis & Gunn’s beers take a little bit of getting used to at first. As they’re brewed in Scotland, and oak-aged, you expect them to have some of the peaty, smoky character of Scotch whisky. But they don’t, and that takes you aback a bit. What I eventually decided they most resembled was a beer equivalent to American Bourbon-style whiskeys, smooth and slightly sweet, with pronounced oak, vanilla and toffee notes to its flavor. Once you understand what it’s getting at, you can appreciate it more.

A variant that seems especially suited to the style was the Rum Finish variety that I recently picked up in Tesco. (The photo says “Rum Cask”, but it was “Rum Finish” on the actual bottle) This was a rather steep £1.99 for 330 mls, but was available in a 3 for 2 offer covering a wide range of “world” and “craft” beers. It’s 7.4% ABV, so just coming under the HSBD threshold, and in the glass looks very much like Coke – dark but translucent with a thin but lasting head.

The typical I & G vanilla character is fairly subdued, but the toffee comes through strongly, and it is mixed with distinct fruit and spice notes. There’s a definite alcohol kick, but it’s relatively smooth and light-bodied and so is easy to drink – it’s not a heavy, chewy beer like many ales of this kind of strength. An ideal beer to sip and savour on a cold winter’s night, and probably the best I have sampled from this brewery.
Posted by Curmudgeon on December 21, 2011