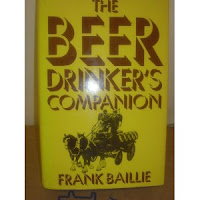 I recently obtained via eBay a copy of Frank Baillie’s classic book The Beer Drinker’s Companion, first published in 1973. Although dating from slightly after the formation of CAMRA, it is essentially a pre-CAMRA view of the British brewing industry. It says of the author (now deceased) on the back cover:

Frank Baillie assiduously researches the practical aspects of beer as a hobby, has drunk beer in thirty-six countries, and has drunk all the draught beers presently available as well as a great many keg and bottled beers.

I haven’t been able to find any kind of obituary on the Internet, but I have been told he was apparently a heroic toper.

It contains the usual descriptions of the method of brewing beer, the history and development of the brewing industry, and methods of dispense, which are now seen as commonplace, but at the time were quite revelatory. However, the centrepiece of the book are the detailed descriptions of the 88 independent breweries then in existence in the UK, with a potted history, full beer ranges and an indication of where their beers could be found. For some of the smaller breweries he is very specific about where their tied pubs were located.

This list – now, by my reckoning, whittled down to 38 survivors – includes breweries that barely made it into the CAMRA era such as Workington, Melbourns of Stamford, and Gray’s of Chelmsford, and also two odd little breweries just serving the off-trade, Cook’s in Essex and Hoskins of Leicester.

He mentions the four surviving home-brew pubs and also tells how there were a few more than just failed to make it through to the era of the real ale revival, most notably the Britannia in Loughborough where brewing only stopped in 1972.

By current standards, the tasting notes are very rudimentary. For example, Robinson’s Best Bitter is “quite a well hopped draught beer”, while Holt’s is “a well-balanced traditional brew”. He doesn’t acknowledge the existence of Robinson’s “Ordinary” bitter – had it not been introduced then, or did he just not notice it because it was in so few pubs?

One interesting point is the number of independent breweries such as Fullers making extensive use of top pressure dispense. I can only recall one occasion when I drank what I believed at the time to be top pressure beer, although there may have been more. I suspect, once “real ale” came to be seen as a selling point, the breweries thought “why should we be applying gas to what is basically proper cask beer?” Arguably CAMRA’s greatest achievement in its early years was not to turn the keg tide, but to virtually eliminate top pressure. As far as I’m aware, it’s a method of beer dispense that has completely died the death for twenty or more years now. Indeed, is there any tank beer still being produced now?

A fascinating book that paints a picture of an era very different from today – the geographical limitations on the availability of most beers, and the dominance of the tied house system being two of the major points that stand out. Was it better or worse than today – well, that’s a subjective judgment, but the pub trade as a whole was certainly much healthier and there was a refreshing absence of anti-drink paranoia. Incidentally, you may be interested in this post from last year about beer drinking in different eras.