It’s not going away 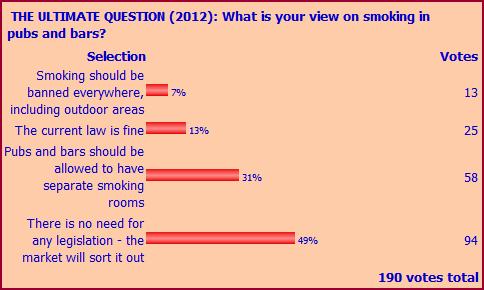 Last August I ran a poll entitled “The Ultimate Question” asking for people’s views on the issue of smoking in pubs and bars. The results can be seen here.

I’ve now repeated the poll a year later with exactly the same questions, with the results as shown on the right. There was a 43% increase in the total number of respondents, and virtually no change in both the number supporting the option of “let the market sort it out”, and the number supporting some form of liberalisation of the law, which is still 80% of the total. As before, just under 50% believed there was no need for any legislation on the subject.

On the other hand, although the numbers are small, there was an increase in the percentage supporting further restrictions, largely at the expense of those supporting the status quo. Presumably they want to put as many pubs out of business as possible. This would completely remove the figleaf of claiming that pubs still make provision for smokers. This suggests that if anything the debate is becoming more polarised. The table below shows a comparison of the two years’ results. 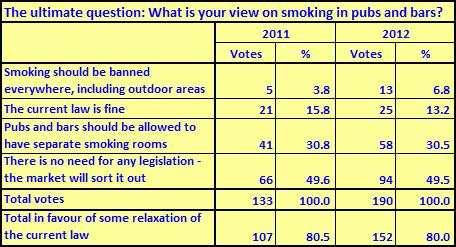 You may also be interested in this piece from me on the subject printed this month in the local CAMRA magazine Opening Times.