Sent back to the bench 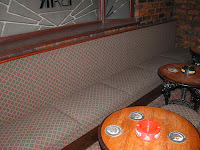 Back in the 60s and 70s, Robinson’s brewery in Stockport, while in many ways very traditionally run, had a penchant for doing up their pubs in a distinctive and rather unsympathetic modern style which came to be known as “Robinsonisation”. No doubt this came across as trendy and state-of-the-art in 1968, but by the mid-80s it looked very dated. Typical features included enlarging windows and putting in small rectangular panes including a few “bottle ends”, knocking through rooms with “Spanish arches”, banisters as internal dividers, the removal of much fixed seating in favour of stools or low chairs, and plain white artexed walls with a stippled or swirled pattern.

One by-product of this was the creation of some of the most characterless and unwelcoming pub rooms imaginable, with bare white walls and just four or six small tables surrounded by loose stools (!?), resembling nothing so much as the breakfast room in a downmarket B&B. I can think of at least three pubs that at some time had one of these in all its glory. In one – the Navigation in Marple – this scheme was later replaced by conventional fixed seating all around the walls, to the great improvement of both comfort and atmosphere.

However, in a recent refurbishment, which has been trumpeted in the company magazine, the fixed seating has been ripped out again and replaced by loose chairs, albeit this time in a darker colour scheme. This means the room has less seating capacity and is much less “pubby” in feel. It continues to baffle me why interior designers continue to see fixed seating as such an undesirable feature – I suspect, deep down, it is because they want pubs to look less like, well, pubs. It also in this case seems to reflect upmarket aspirations that might be more at home in a rural dining pub than a town centre local.

Interestingly, on this occasion, the Railway half a mile down the road, which has a smart 1990s interior scheme with a wealth of wall benches, was markedly busier. Maybe that should tell them something.

On the other hand, the Blossoms in Heaviley, Stockport, which Robinson’s have themed as an “Ale Shrine”, has had the two former vault-style rooms at the front, one containing a pool table, restyled into traditional lounges with benches all around the walls, so obviously someone recognises it can be a good idea.