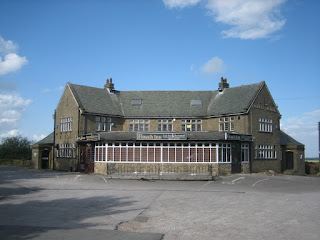 The Flouch Inn for many years was a well-known landmark on the main road from Manchester to Sheffield across the Woodhead Pass. About twenty-five years ago it was partially bypassed when the route of the A628 was aligned to a new roundabout a little further south, to which it still gives its name. I think it’s been closed for a few years now, in its final incarnation having been partially used as a Balti restaurant. Now it’s reported that the pub is to be demolished and the site redeveloped for housing.

The photo shows a handsome 1930s stone building, although rather marred by the later conservatory-type extension at the front. I may be wrong, but I don’t remember that being there in 1985 when, ironically, we tried to go in for some food on a Sunday and found it too full. That’s the nearest I ever came to actually going in it. Like many pubs in and around Sheffield, it was tied to Bass in those days.