Don’t get your hopes up

It’s long been an article of faith amongst many CAMRA members and anti-pubco activists that a major cause of pub decline is conversions to retail or office use that can, under the current law, be carried out without needing planning permission. They have therefore campaigned for this “loophole” to be closed, and the government has now committed to do this, an announcement that was treated by CAMRA as a major cause for celebration.

However, I’ve always argued that this has been greatly exaggerated as a reason for pub closures. You already need planning permission to convert a pub to residential use, or to demolish it and build a supermarket on the site. And, if the owner really doesn’t consider a pub to be viable, then getting planning permission to turn it into a shop may involve some extra effort, but is hardly an insurmountable barrier.

It’s interesting that in this news report, Dale Ingram, who has long been recognised as a vocal anti-pubco campaigner, reckons that, nationwide, this change is only likely to save 15 pubs a year nationwide, against a total of 1,200 closing. And I’d bet most of those will be in London where development pressure is far greater than anywhere else in the country. Frankly, it’s a drop in the ocean. 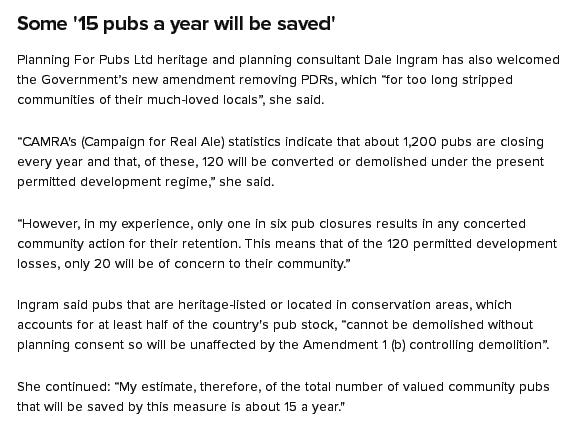 The point of the planning system is to prevent developments and changes of use that councils believe are inappropriate or would damage the character of an area. It can’t mandate that premises be used in a particular way, and if councils decide to dig their heels in over proposed retail conversions it could result in staring contests with owners and leave pubs derelict for a protracted period.

Don’t get me wrong, I think this is a welcome change which recognises that pubs are a distinct category of business that is often valued by local communities, and so official review is desirable before turning them into something else. It might cause pub owners to think again in a few marginal cases. But nobody should delude themselves that, in the overall scheme of things, it’s going to make much difference to the rate of pub closures. The “pub crisis” is fundamentally one of demand, not supply, and no amount of planning curbs is going to change that. To claim otherwise is putting across a false narrative about the causes of pub decline that does the prospects of pubs no favours.

We are yet to see the precise details of the plans. But if you turn a wool shop into a micropub, and then need planning permission eighteen months later to convert it back into a wool shop if it proves unsuccessful, it’s likely to deter people from opening up new pubs and bars in the first place, and could end up becoming a Pyrrhic victory. Surely there needs to be a time limit before the protection kicks in.