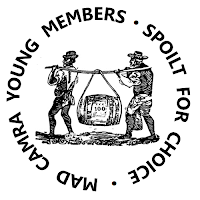 The March edition of CAMRA’s monthly newspaper What’s Brewing contained a long letter from seven representatives of young members’ groups complaining that the organisation wasn’t doing enough to encourage the participation of younger people. Specifically, it was accused of becoming a “pensioners’ drinking club” and being “riddled with accusations of sexism and cronyism.” Given the prominence given to the letter, it seems clear that it was to some degree encouraged by the CAMRA hierarchy.

However, it has emerged into the public domain and over the weekend generated pieces in both the Daily Mirror and Daily Mail, which didn’t exactly show the organisation in a good light. And the question must be asked whether, regardless of the substance of the complaints, the best way to advance them was in a way that came across as the divisive playing of identity politics and disrespectful of the older generation.

Like most other similar organisations, CAMRA has an ageing membership profile, and inevitably the general social ambiance and the activities it runs will reflect that. Experience has shown that events designed specifically to attract younger members have often fallen flat on their face, and run the risk of coming across as patronising. And what aspects of “campaigning for real ale” are specifically youth-oriented anyway? Do the younger members of the RSPB favour spotting different birds from their older colleagues? Is it actually helpful to create a kind of young people’s ghetto?

The general tenor of conversation will naturally follow the inclinations of those involved, but many of the accusations of sexism come across as overdone and manufactured by people who are setting out to seek offence. When we have widespread problems of rape gangs, sex trafficking and female genital mutilation, is it really worth getting worked up about a cartoon fox on a pumpclip? And it’s a bit rich complaining about sexism when you are yourself undertaking an exercise that could be regarded as an example of ageism.

While things may be different at a branch level, a visit to CAMRA’s online Discourse discussion forum will quickly reveal that the “modernisers” very much hold sway, and those of a more traditional bent are often given short shrift.

On the ground, it is true that a high proportion of positions are held by over-50s, which is going to become a growing problem in the coming years. But younger people are simply not coming forward to fill their shoes. I’d be very surprised if any branches were actively discouraging younger volunteers – they can’t afford to. It seems that kind of volunteer work in general no longer holds the attraction it once did – this isn’t a problem unique to CAMRA. In the long term, surely the best way to change things in any organisation is actually to get involved rather than just to complain from the sidelines.

Maybe this also indicates that last year’s much-vaunted Revitalisation project hasn’t actually solved anything, and indeed has left CAMRA less clear about what it actually stands for. As I’ve argued before, there is a fundamental divide between those who want it to support good beer in all forms (however defined) and those who want to concentrate on championing a particular distinctive British tradition. The two are mutually exclusive objectives, and the cracks can only be papered over so far. It could be considered to be rather like our two main political parties which recent months have shown to be composed of increasingly incompatible bedfellows.