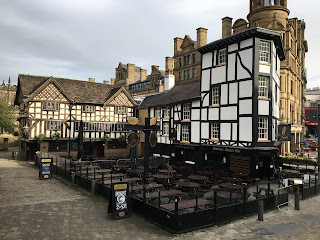 Yesterday’s Sunday Telegraph carried a feature article by beer writer Adrian Tierney-Jones on the reasons behind Samuel Smith’s perhaps unlikely success story. It’s paywalled, but I believe it’s possible to read a limited number of articles for free. It includes a brief quotation from me (albeit without any explanation of who I am):


They are pubs as they used to be,” says Peter Edwardson, “though I do think the mobile phone ban is bonkers and represents eccentricity taken a bit too far.”

And a lengthier explanation from Peter Alexander aka Tandleman, which hits the nail on the head.


For Peter Alexander, a Rochdale-based beer writer and CAMRA activist, the pubs’ popularity is due to the fact that visiting them is “like stepping back into the late 70s and early 80s. They are clean and bright, not hugely over-decorated and well run. There is no music. The beer is cheap, with a pint of keg mild being £1.29 and Old Brewery Bitter below £2, so they attract people who don’t have much to spend. The bottled beer and spirits prices are higher though — £6 for Imperial Stout for instance.

“The thing about Humphrey Smith,” he adds, “is that he has a demographic of customers who find the pubs comfortable, and they are mainly in their fifties, sixties and seventies. He also doesn’t stint on heating with the pubs always having coal fires in the winter.”

This comment from an ex-manager sums it up very well:


A former licensee I spoke with (on condition of anonymity) said that the pubs’ success was due to the fact that they have got their business model absolutely right. “They trade off their heritage, which is real and authentic. They are streets ahead of other pubs that also try to trade as traditional pubs. The authenticity is why I bought it into it. They were also the first brewery to be vegan, and the beer is also crucial to their reputation as it is so natural.”

No other pub chain comes anywhere close to matching the ambiance of pubs as people imagine they used to be. In Sam’s pubs, people do talk to each other in a way they rarely do elsewhere.

It was also very well explained in Anthony Avis’ book on the postwar brewing industry. He praises Samuel Smith’s for being an “exemplar among the smaller brewery companies”, and says “The custom is aimed at the older person, who relishes a good pint, with home-produced food if he wants it, and the surroundings to sit down and talk with his companions in unfashionable comfort – just like the brewery industry advertising of forty years ago represented pubs to be”. This was written in the 1990s, but remains just as true today, especially the “unfashionable comfort” point, at a time when many other operators seem determined to make their pubs as uncomfortable as possible.

As regular readers will know, I have long been a strong supporter of Samuel Smith’s general approach to their pubs, and locally often find them the most congenial places to go for a drink. However, while I can easily manage without my phone for the time it takes me to drink a couple of pints, I do regard that particular policy as a ban too far. I am also somewhat dismayed by Humphrey Smith’s refusal to employ relief managers, which leads to unnecessary and often protracted closures of pubs that on the face of it appear to be perfectly viable.