Drinking with the enemy 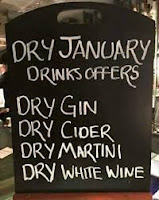 For a number of years, we have seen the Dry January campaign run by the public health lobby, which aims to encourage people to abstain from alcohol entirely throughout the month and hopefully to take stock of their drinking in a wider sense. Understandably, the licensed trade have viewed this as a threat to their business, especially as January is one of the slackest months for trade and a time that sees many pubs financially struggling. As a response, various initiatives have been devised, including Drinkuary (which now seems to have faded away) and, most prominently, Tryanuary. This aims not to encourage people to drink more, but to take the opportunity to try out new and unfamiliar beers and venues.

However, we are now seeing voices raised that are critical of this approach, arguing that to oppose Dry January comes across as disrespectful and unhelpful to people who are genuinely trying to reduce their consumption or grappling with alcohol-related problems, not to mention being potentially damaging to business, For example, see this post on Bring on the Beer, a blog which I have to admit I hadn’t previously come across.


I wouldn't for one moment decry desperate business owners for being miffed at a campaign that they perceive as seeking to undermine their footfall at a needy time of year. But I would like to know if it's been proven that that's where their ire should be directed. Blunt, hostile rejection of the "other" camp is completely illogical and does more harm than any abstinence campaign ever could. If a pub does put out a tweet saying "Forget (or stronger) Dryanuary" it makes it less likely that folks will come into their pub to partake of a soft drink or two, so they're basically shooting themselves in the foot.

The post makes some nuanced points, not least that Dry January is unlikely to reach those most in need of a break from alcohol, and is well worth reading. However, it is important to distinguish the individual from the general. On the personal level, people may well wish to reduce their overall alcohol consumption, or give it a miss for a while, and that needs to be respected. They shouldn’t be badgered into have a drink when they don’t want one, or told that they’re letting the side down, and pubs should offer products that enable them to make a non-alcoholic choice, which of course in general they do.

But Dry January isn’t just about individual responsibility. It is a campaign that has been consciously crafted by the anti-drink lobby with the declared intention of not just allowing people something of a detox but to review their entire relationship with alcohol. It takes advantage of the fact that, after Christmas and New Year, people maybe will feel they’ve overdone it a bit, and may also find themselves short of funds, so abstinence becomes doubly attractive. In the past, anti-drink campaigns often focused on morality and the role of drink as a step on the road to ruin, but now they have been subtly redirected to capitalise on contemporary concerns about health and general feelings of purity and well-being.

This objective is made explicit in this blogpost, which also reiterates the point that Dry January does little to help those most in need of it.


For two campaigns aimed at helping beer sellers and alcoholics, it seems that neither of them actually have much effect. It can be argued that Tryanuary doesn't drive more folk to pubs in January than those who would go anyway, and Dryanuary is mostly partaken by folk who sensibly drink in moderation. Which means that, when you strip away the superficiality of likes, retweets, shares, headlines and humblebragging social media posts, the real world effect is negligible at best.

So what does this mean for the value of Dry January? It’s potentially helpful for a lot of people at an individual level, but for me its key contribution is about culture change, which then provides a space for policy change.

First, it prompts everyone to think about their alcohol consumption, and that fits perfectly with Alcohol Change UK’s admirable goal of getting everyone to make well-informed decisions.

Second, it provides an opportunity for commentators and policymakers to note that alcohol isn’t just any other commodity, and for all its strengths the individual-focused approach of Dry January doesn’t work for everyone, so we need more.

“Its key contribution is about culture change, which then provides a space for policy change.” Mark those words very carefully.

Some initiatives proposed by the anti-drink lobby may actually make sense. But they should always be taken with a large pinch of salt, because we know all too well what their ultimate objective is. There is no acceptable end-point short of outright prohibition, and whatever you agree with, they will always come back for more. Therefore, while it may well be prudent for pubs to keep their heads down during Dry January, and make good business sense to offer alcohol-free products, embracing the concept is effectively getting into bed with those who wish to destroy you.

The point has also been made, for example in the blogpost I linked to above, that, given the greatly improved choice and quality of alcohol-free beers available now, doing without alcohol doesn’t require as much of a sacrifice as it once did. There’s certainly a fair amount of truth in that – it’s no longer a question of having just a limited selection of bland ersatz lagers, although in practice the range available in the typical pub is still pretty narrow.

However, it misses the point that the fundamental reason people drink beer is because it contains alcohol. While people may have entirely valid reasons for choosing an alcohol-free beer, and I sometimes drink it myself, it’s always to some extent a distress purchase. They are intended to mimic, as far as possible, the experience of drinking a standard beer, but with that crucial element omitted. Ideally, all other things being equal, people would prefer to be drinking a normal-strength equivalent.

Without standard beer, there would be no alcohol-free beer, just as there would be no decaffeinated coffee without regular coffee or nut roasts without meat roasts. One is a mere echo of the other. While people may be happy enough with an alcohol-free beer if they find themselves in the pub, they’re not going to go out of their way to seek them out. Nobody is going to go on AFB pub crawls. So it’s always going to be an inferior substitute that falls short of the real thing, but will constantly remind you of it.

People who choose to switch to AFBs during January are not, in practice, going to spend as much time or money in pubs, so it is still undermining the trade to some extent. There may be the odd exception, but they will be vanishingly few. The best way to cut down on alcohol is simply not to go to the pub in the first place. And it should always be remembered that, without alcoholic drinks, and the people who consume them, there would be no pubs.